Living in the city, I don’t do a lot of serious trail running. I run in Toronto’s High Park and through the Don Valley, which are both beautiful, but I’m never more than a few hundred metres from the city. I don’t have a lot of use for serious trail gear. I never get lost. I don’t climb many hills.

The Garmin Fenix 2 was not designed for me. It was designed for people cooler than myself, people who do run up mountains and get lost in the woods. So when I decided to give activities similar to those a try over the holidays, I took it with me. At the time that I left with the watch I didn’t realize how powerful it is.

The watch is no longer what some would consider new. At about a year old, Garmin has fixed a few of the problems people were unhappy with originally, notably a GPS accuracy bug. 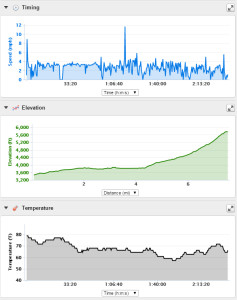 Firstly, the Fenix 2 looks awesome. A matte black, large-faced bulking piece of wristwear, the device feels as though you could call in air support with it. The red backlight looks like something from a submarine control room. It nearly lives up to these fantasies.

The watch does everything you can think a sport watch might want to do, short of becoming a smartwatch that will run apps. It records pace, GPS tracks, elevation, heart rate, cadence, temperature and barometric pressure.  It also packs a compass, waypoint marking, live maps of the route you’re on and built in navigation.

There are plenty of options for different sports that return different metrics and display different fields. There are running, trail running, cycling, ski/board and climbing options. You can also create your own settings using any of the features the watch will track.

For most runners, the Fenix is overkill. You don’t need to know your elevation or the barometric pressure when you head out for a quick few kilometres, but after a while of using the watch I found myself checking elevation before and after runs, hikes or rides, interested in the elevation I’d climbed. Once I’d made it to a point I was trying to get to, I could switch the watch into trackback mode and it would lead me home, following my original route.

The barometer seemed silly at first, but I soon came to realize it’s usefulness when outside all day. The watch buzzes when the pressure drops, telling you there may be rain coming. Though the storm alert went off occasionally without any precipitation, often I knew in advance when I was in for rain. It also freaks out when you take off in a plane, which can be mildly amusing.

Even the battery life on a watch that does so much impressed me. Without the GPS on, the watch will last over a week. With GPS on, you can get about two days of battery life.

More than anything, I was impressed by the Fenix’s fixing of problems I never knew I really had. As a millennial, and having never circumnavigated anything, my experience with compasses is pretty limited. Still, when one is available all the time on your wrist the usefulness becomes immediately apparent. Also, marking GPS coordinates in a strange town that you want to come back to later is super useful, especially when the same device on your wrist will tell you how to get there.

Overall, the watch is more than you need for a running GPS watch. You don’t need to spend the money on this if you’re using it to track mileage around the city and that’s it, but if you practice many outdoor sports or like getting lost, this is the device which will fill in the holes. Rather than having different devices for hiking, running, swimming and cycling, the Fenix 2 will do it all for you.