Track and field events got under way in Tokyo today, and four Canadian athletes advanced to the next round in their events: Matt Hughes and John Gay will race the men’s 3,000m steeplechase final, with Hughes running a season’s best 8:13.56 and Gay an almost four-second PB of 8:16.99, while eight-time Canadian champion Crystal Emmanuel and Khamica Bingham advance to the semifinals of the women’s 100 metres. Emmanuel finished third in her heat, qualifying automatically.

RELATED: Your weekend guide to track events at Tokyo 2020 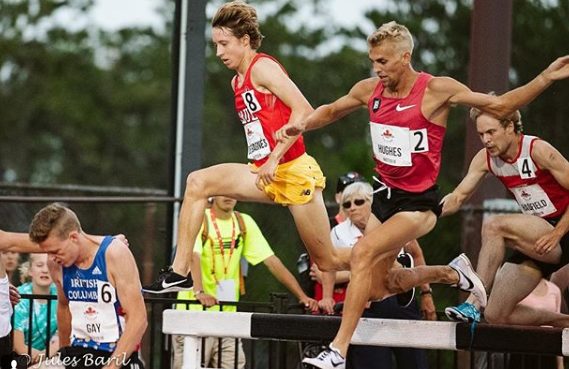 There were no major upsets in the men’s steeple heats, with the exception of Hillary Bor, winner of the U.S. Trials, who did not advance. This event has been won by a Kenyan for the past nine Games, but 2016 gold medallist and 2019 world champion Conseslus Kipruto failed to qualify and is not competing in Tokyo. (He is also facing sexual misconduct charges in Kenya.) Fifteen men, including Hughes and Gay, will advance to the final on Monday evening in Tokyo (Monday morning in Canada), including 2019 world championships silver medallist Lamecha Girma of Ethiopia, bronze medallist Soufiane El Bakkali of Morocco, U.S. Trials silver medallist Benard Keter and Ruyji Miura, whose performance today set a national record of 8:09.92 for his native Japan.

Much has been made of the heat and humidity in Tokyo, but it actually benefits sprinters, who often struggle to stay warm in cooler conditions. Elaine Thompson-Herah ran a blistering 10.82 to win heat 2, then was outdone by Marie-Josee Ta Lou of Ivory Coast, who ran a 10.78, followed by a 10.84 by double Olympic champion Shelly Ann Fraser-Pryce of Jamaica – the fastest heats in years.

Jenna Prandini, who replaced Sha’Carri Richardson on Team USA (who was suspended for one month for a doping infraction), finished third in her heat for an auto-qual to the semifinal.

Matt Hughes and John Gay have both qualified for the men's 3,000-metre steeplechase in Tokyo! See you both on track on Day 4 for the final!#ExperienceGreatness#Athletics#TeamCanada pic.twitter.com/e6OUcPtG80

Heartbreak for Bishop-Nriagu in the women’s 800m

After six heats of the very deep women’s 800m, 24 women advanced to the semifinals. Canada’s Madeleine Kelly and Lindsey Butterworth, both competing in their first Olympics, finished fifth in their respective heats, and did not advance. Melissa Bishop–Nriagu, who finished fourth in the final at Rio in 2016, has had an excellent season leading up to Tokyo and was gunning for a medal there. Finishing fourth in her heat with a 2:02.11, she had the fastest time of the three, but narrowly missed a non-auto qualifying time. Sadly, the Olympics are over for our women’s 800m runners. (TSN reported Friday that Bishop-Nriagu, who has run sub-2 four times this season, strained her hamstring while training in Gifu last week and wasn’t even sure she’d be able to race – which helps explain her performance.)

Viewers in Canada can watch all the Olympic action on the track on the CBC Olympic app or at CBC Gem. For the complete schedule, click here. Local times are 13 hours ahead of ET, 16 hours ahead of PT.