After an outcry on social media by people who discovered that the Virgin Money London Marathon has a policy of not awarding finishers’ medals to guide runners (primarily those assisting the visually impaired), the race has reversed its policy. It announced yesterday that it will now grant guide runners a timing chip, finishers’ medal and T-shirt, in addition to the free race entry they have always enjoyed. 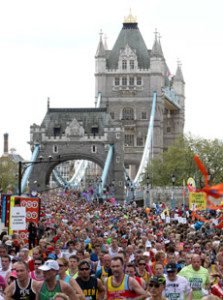 The policy as it stood in the new year, when we first reported on the controversy, was not new. It is common for marathons to offer free entry to guide runners when supporting another runner, but not an official time or any of the other perks that go with a race entry or finish, since they are there only to assist their runner. Some observers expressed concern that if guides were subject to the same perks as other runners, it could leave disabled runners open to exploitation.

But many visually impaired runners expressed dismay that their guides, without whom they could not run, and who must train for the distance just as they do, were not entitled to any of the traditional rewards that go with finishing a marathon. And it appears the race was concerned enough about the optics of the policy (pun intended) to change it.

Our policy on guide runners at the Virgin Money London Marathon has been reviewed.

Read the full statement from our Event Director: https://t.co/8iOJYv3Nn1#LondonMarathon pic.twitter.com/IQ6UQjNYYV

In a statement on the race website yesterday, race director Hugh Brasher said that guide runners do an “incredible job” assisting others, and that guide runners’ official times will now be linked to their runner’s official time in the results, and their status as guide will be clear. They will also now be able to collect a medal and recovery bag at the finish line.

It was also made clear that if the runner they are attached to were not able to run the race for any reason, the guide runner would not be allowed to start.

Rhonda-Marie Parke, a visually impaired ultrarunner from Kitchener, Ont., commented in an email: “This is amazing! The hope is [that] other races will take note and revise their policies. The next step? Create and celebrate an Athletes With Disability finishers category.”