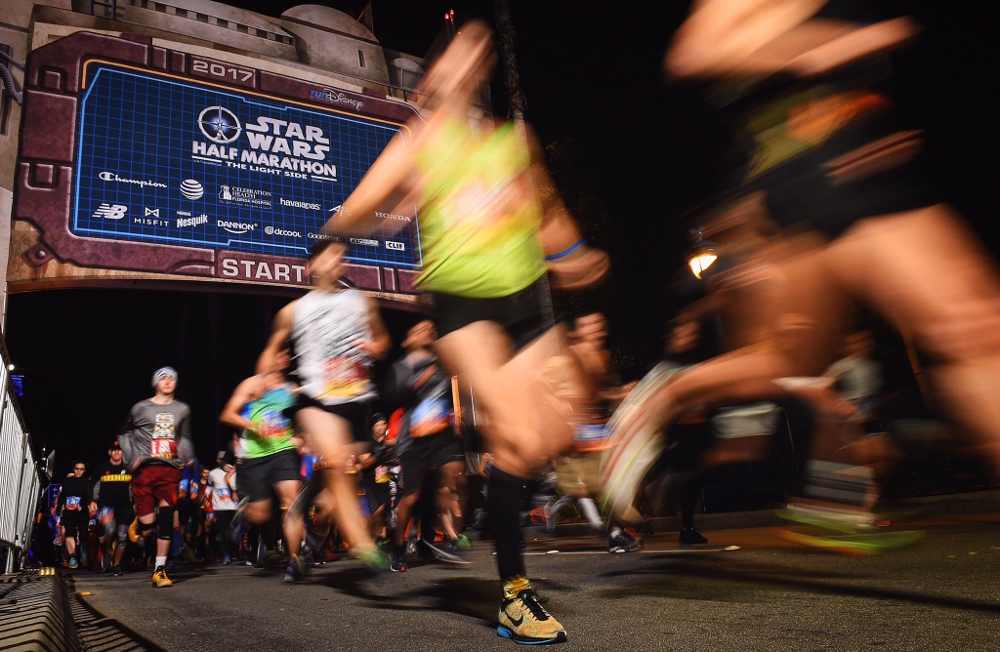 Disneyland Resort in Anaheim, Calif. was full of runners and Star Wars references this weekend.

The Star Wars Half-Marathon – The Light Side was held in southern California from Friday through Sunday one week after the Walt Disney World Marathon in Florida. The event, a favourite among many runners, featured a half-marathon, the Star Wars 10K and the Star Wars 5K.

Race weekend wrapped up on Sunday morning with the half-marathon beginning at 5:30 a.m. (All races began at 5:30 a.m.) As expected, the race medals were a highlight for runners with the half-marathon souvenir reading “May the force be with you.” RunDisney hosts two Star Wars events each year including this past weekend’s Light Side and April’s Dark Side. The April event is Empire-themed where Darth Vader is likely to make an appearance.

Runners may have been particularly motivated as this weekend’s races came one month after the release of Rogue One: A Star Wars Story. Participants were dressed as Ewoks, Jedi, Lando Calrissian, Wookiees and many others.

One of the weekend’s highlights was the Rebel Challenge, which involves running both the 10K and half-marathon on back-to-back days on Saturday and Sunday. Like the Walt Disney World Marathon Dopey Challenge, runners earn a medal for each of the individual races as well as the Star Wars Rebel Challenge finisher medal.

Some rad costumes from those that ran with the Force during the @rundisney #StarWarsHalf Marathon -The Light Side 10K. #StarWars

Nick Arciniaga, who last year won the Star Wars Half-Marathon finishing with a lightsaber in hand, finished sixth on Sunday morning and was dressed appropriately for the entire 21.1K. He referred to his singlet as a “storm trooper jersey.”

Fun fact! Today's @rundisney @starwars #halfmarathon was my 33rd half marathon. It's fun because I'm 33 years old. It's not my birthday though. Maybe that wasn't a super fun fact. #SweetMedalThough. ? @c_arciniaga

A photo posted by CraftyDisneyNerdRuns! (@craftydisneynerdruns) on Jan 15, 2017 at 9:51am PST

It's not every day you meet your heroes. @runDisney #StarWarsHalf – The Light Side 10K pic.twitter.com/z8ROfowNc9

They found the droids they were looking for at the @runDisney #StarWarsHalf – The Light Side 5K. pic.twitter.com/YzO2zNeT2K

The Force is strong at the #runDisney #StarWarsHalf 10K at @Disneyland! pic.twitter.com/l5fW05WagM

It’s time to race through the galaxy at the #runDisney #StarWarsHalf – The Light Side 5K! pic.twitter.com/iv9M6qpDjo

Running the galaxy. @runDisney #StarWarsHalf – The Light Side 10K pic.twitter.com/ZSTaCX3kNw

This will be a weekend long remembered. Congrats to everyone who participated in the #runDisney #StarWarsHalf Marathon – The Light Side! pic.twitter.com/Y0ENGWI4Xe

BB8! ? Totally worth losing a minute of my time for a pic with this droid! ? #bb8 #disneyland #starwars #thedroidimlookingfor #rundisney2017 #starwarshalf

Used the force to run the #starwarshalf this morning. I'm coming for you next #kaiserpermanentehalfmarathon #watchmiarun