When Rotterdam Marathon organizers announced that the event, scheduled for April 5, would be postponed due to COVID-19, Ana Laura Fray of New Tecumseh, Ont., didn’t let it affect her training. She’d been working toward Rotterdam for months, and she was feeling stronger than ever before, so she stayed on schedule and finished her final block of training. In the final week of her block, she decided to run a marathon, after all. It was no Rotterdam (she ran around a 1K loop in her neighbourhood 42 times), but she got to run her marathon, and she even managed to clock a new PB of 2:57:52, showing that you don’t need an official event to have a race.

Fray’s run many marathons, and Rotterdam would have been her 17th. In October 2018, she ran her previous marathon best in Quebec at the Marathon du P’tit Train du Nord, posting a 2:59:24.

“I ran a sub-three, so that gave me the sub-elite qualification for Rotterdam,” she says. Last April, she ran the London Marathon, where she was the second-fastest Canadian woman in 3:02:00. Rotterdam would have been her sub-elite debut, but that will have to wait.

Fray’s road to her new (unofficial) PB wasn’t easy, and she says this race was “probably the toughest marathon I’ve done.” Running 42 laps of a 1K loop was a challenge, she says, and the boredom started to get to her a few times mid-run.

“Being by myself was quite the challenge,” she says. “I didn’t think I’d miss the energy of a real race.” Although her race course wasn’t lined with thousands of loud and excited spectators, she did have a support crew (well, a one-man support crew that consisted of her partner, Luke) who cheered her on and handed her gels and water whenever she needed them.

When she planned her solo marathon, Fray considered following a longer route, but as the coronavirus situation got more serious, she decided that wasn’t the best idea.

“I figured I should just stay really close to home,” she says. “That way I’d avoid people and if anything had happened, I would have been just metres away from my house.” She says she didn’t care what the route was—as long as she ran a full marathon, it didn’t matter.

At around 30K, she hit a mental wall, and things started to get tough. She says she considered switching up her route and going somewhere else, just for a change of scenery, but she knew that it was too late. 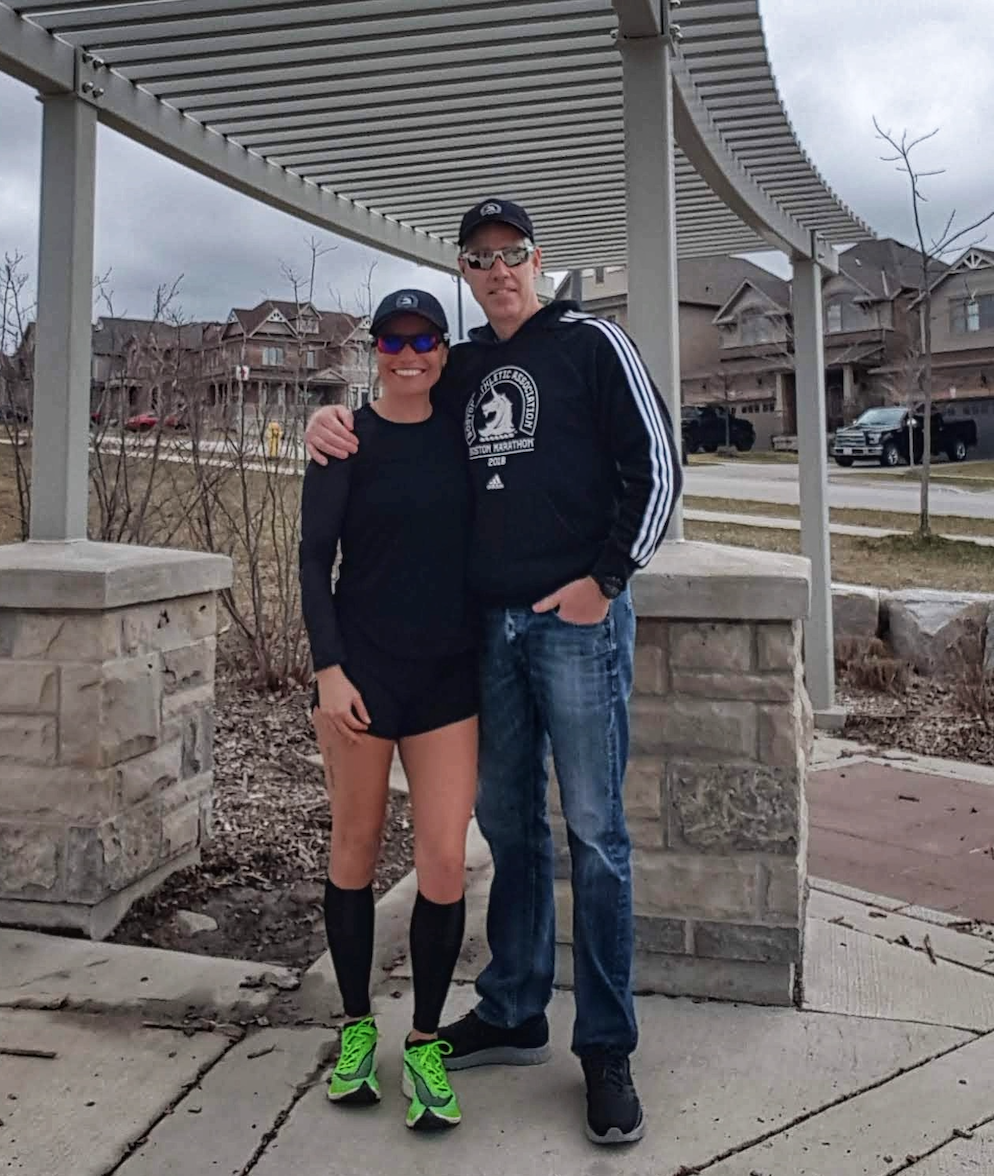 “In any race, you always go through those moments when things get hard,” she says. “This time, that happened earlier than usual. I’d never thought of quitting a race before, but on Saturday I did.” She began questioning why she was doing it in the first place, and she entertained the idea of calling it off mid-run. Luckily, Luke wouldn’t let her quit.

“With a little push from Luke, I was able to focus again.” She began to count down her final kilometres. At 32K, 10K to go seemed much too long. At 34K, she told herself she’d already come so far and that she couldn’t quit. With 6K to go, she began to settle in again, and she believed she could make it. She pushed onward, and eventually made it to the finish line with a hard-earned PB of over a minute. She even went a little longer, running 42.3K, just to make it “more fair.” 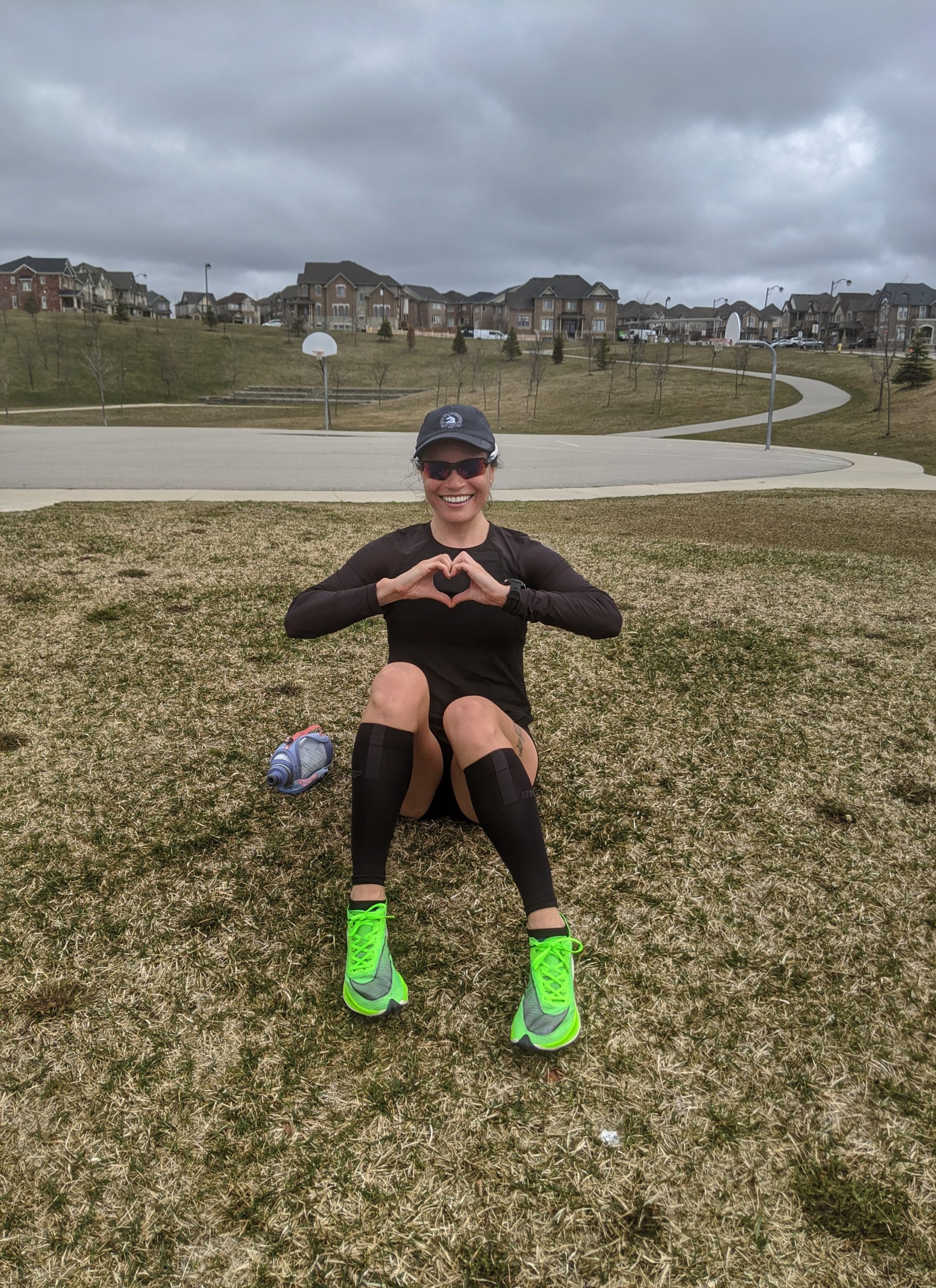 Fray says she’s happy with her race and she knows running a 1K loop 42 times in a row is now small feat. But that’s not her main reason for being proud of herself.

“For me, the biggest accomplishment from this is just the fact that, with everything that’s going on, I decided that I wasn’t going to quit my training,” she says. “I felt like my fitness was the greatest it’s ever been and I just didn’t want to quit. I figured that I had a goal in mind, so I kept pushing for it.”