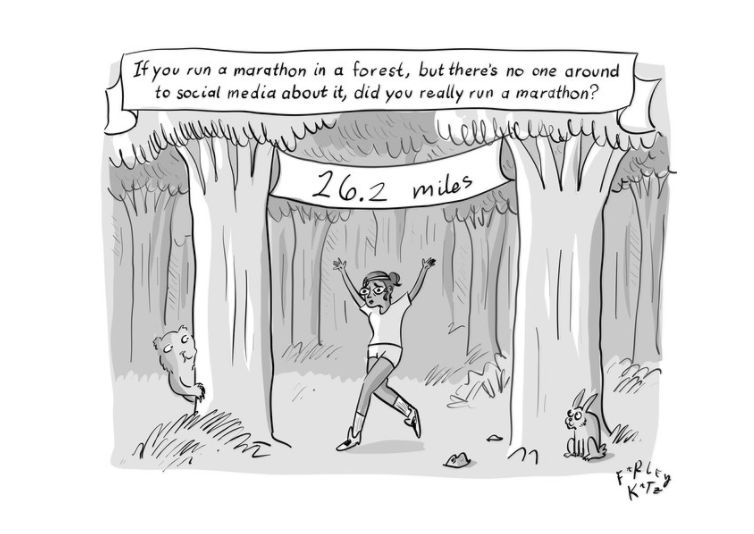 The New Yorker cartoon illustrators certainly aren’t lacking in the wit department. When marathon runners became the subject of one of their daily cartoons, it wasn’t lost on us. Actually, it was much appreciated.

Last week, as Farley Katz’s above illustration captioned: “If you run a marathon in a forest but there’s no one around to social media about it, did you really run a marathon?” made its rounds (on social media, no less), we couldn’t help but crack up. Let’s all just admit it: it’s fairly spot on. We’ll be the first to admit that running culture is pretty social media… er… savvy. (Obsessed?) Come race day, our feeds become flooded with selfies, results, new gear, the works.

It’s a good thing the running community has a sense of humour about the quirky habits that often come with taking up the sport. Actually, in our experience, runners are a pretty self-aware bunch fond of self-deprecating humour. If there’s a group that’s too sensitive to be poked fun of, it’s certainly not marathoners – they love it.

And let’s face it: our passion for running is pretty easy to joke about. We’re constantly giving material to the comedic geniuses of our lives. To the non runner, our obsession can be a bit ridiculous. Just a couple years ago, College Humour created a pretty hilarious video titled: “If people talked about other hobbies the way they do about running” and if you didn’t find at least one of their examples funny, let’s just say you may just be a touch too serious.

This illustration by Katz actually made us think about another video. Remember that clip about the woman who ran a marathon without telling anyone?

All in all, yes that illustration is pretty great. As for the answer to the question it poses, that’s yes, if you run a marathon in a forest and no one’s there to social media about it, you did still run a marathon… you’ll be posting it on Strava later.