Delayed a year due to the COVID-19 pandemic, Perdita Felicien’s book My Mother’s Daughter: A Memoir of Struggle and Triumph was finally launched online on Monday evening. The 10-time Canadian champion, two-time Olympian and 2003 world champion in the 60m hurdles spoke eloquently about her desire to write the book after retiring from the sport in 2013 – and about her decision not to simply write a memoir about her time in the spotlight, but to go back in time, telling the story of her mother’s upbringing in St. Lucia, selling trinkets on the beach to help her family, and her decades-long quest to make a better life in Canada.

Catherine Felicien Browne joined her daughter for the emotional studio interview by CBC reporter Tashauna Reid. Perdita’s own daughter, Nova, who is not yet two, also made an appearance. Catherine wept openly while describing the most difficult parts of her story, which included being brought to Canada by a wealthy white couple in the 1970s to care for their children, while having to leave her own children behind with their grandparents.

She endured poor treatment and hostility in Canada, where there were no laws yet to protect immigrant domestic workers. Catherine returned to St. Lucia briefly with Perdita (who was born in Ontario), later returning to Canada with her and eventually bringing her older children to live with them there. 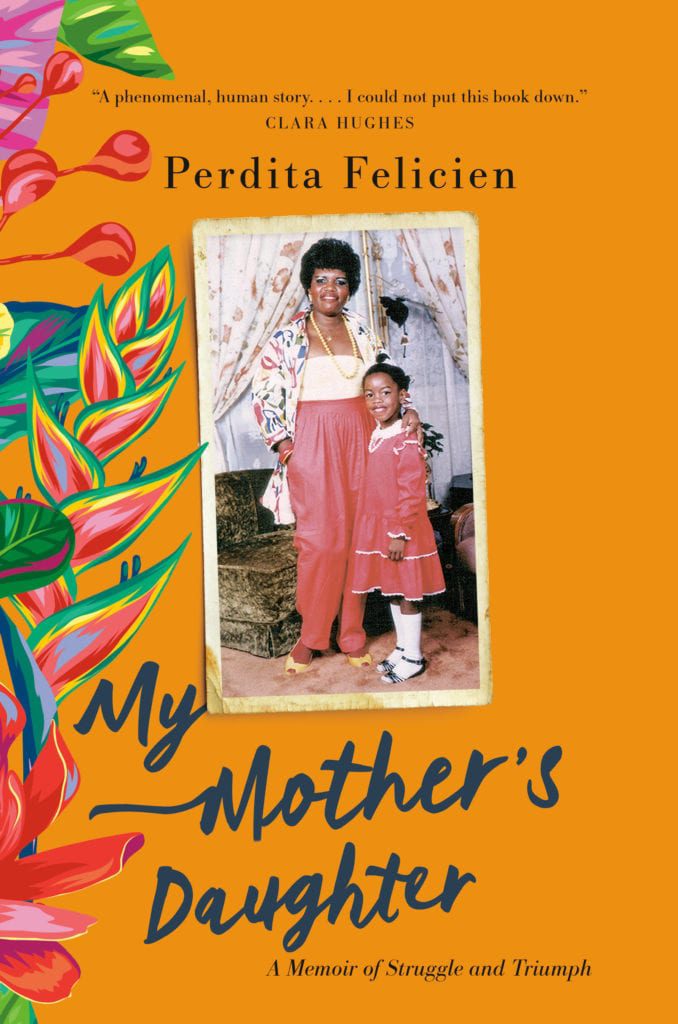 For years, their domestic life was characterized by poverty and abuse. When Perdita was six or seven, Catherine and the children fled to Denise House in Oshawa, Ont., spending several months there before being given a permanent home. Denise House still supports single mothers today, and will receive a portion of the proceeds from the book. Perdita says her father was the last person she told that she was writing the book, and acknowledges that it will not be easy for him to read, while feeling a strong need to tell her and her mother’s story despite all the painful memories.

Somehow, Perdita’s talent for running was discovered and nurtured despite these obstacles, and Catherine soon became her biggest fan, pushing her to take her talent as far as she could, even when Perdita herself couldn’t see a future in sport. Perdita won three D1 NCAA titles for the University of Illinois at Champaign-Urbana, where her mother could not afford to visit her until the day she graduated.

RELATED: Perdita Felicien and partner have a baby girl

Perdita’s rise to the top was followed by disaster at the Athens Olympics of 2004, where, as many Canadians remember, she crashed in the final of the 100m hurdles (which, as the reigning world champion, she was favoured to win). She doesn’t flinch from telling this story, and even read aloud from that passage of the book at yesterday’s launch. Of course Perdita was devastated, but not only because she didn’t win. That fall, she says, meant losing the chance to show her family that everything they had been through was worth it – that she had succeeded.

Perdita says she has made peace, of a sort, with what happened that day. And she continued competing for another nine years, through more setbacks, including a severe injury from a fall in 2008. In addition to her three NCAA titles, world championship gold and 10 Canadian championships, she was the world indoor champion in the 60m hurdles in 2004, world silver medallist in the 100m hurdles in 2007, and world indoor silver medallist in the 60m hurdles in 2010. She also won two silver medals at the Pan Am Games in the 100m hurdles (in 2003 and 2007). She is still the only Canadian woman to win a world championship gold medal in track and field.

A review of My Mother’s Daughter appears in the March & April 2021 issue of Canadian Running, on newsstands until April 15.