For most people who qualify for the Boston Marathon, running Boston has deep significance and may represent years of training and trying to qualify at other marathons. But it’s still just a marathon. But for ultrarunner Henry Ward, 48, it’s something else entirely.

Ward has a pretty typical story of discovering running and becoming obsessed with trying to qualify for Boston. After 17 or 18 tries, he finally ran a 3:15 to qualify for the 2018 edition of his hometown’s famous race. And he is uncommonly proud of his 4:48 finishing time, which was due less to last year’s appalling weather, and more to the way Ward chose to celebrate finally making it: with a Boston “quad”–four marathons, back to back, starting at the finish line on Boylston Street on Sunday and running to Hopkinton and back, then back to Hopkinton a second time, with his first official Boston Marathon as number four. (And he’ll do the same thing this year.) 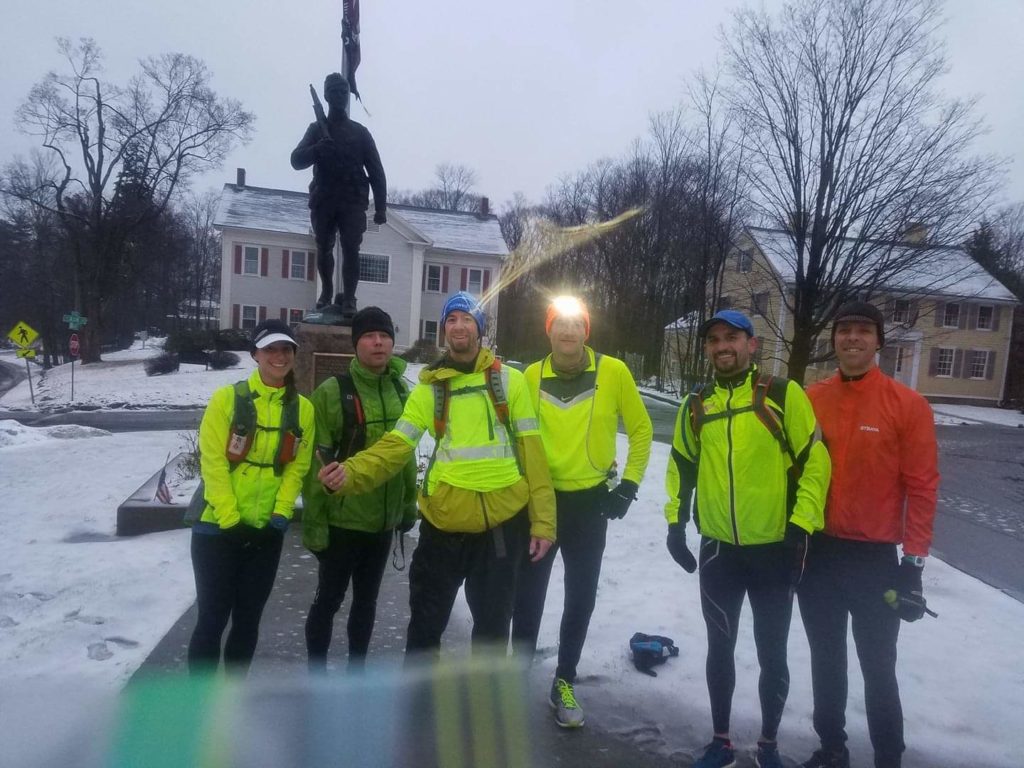 Many people tried to talk him out of it, especially when they saw the weather forecast. But Ward has overcome much greater challenges than running almost 170K straight in brutal weather. Ward is more than 10 years sober, in recovery from alcoholism. Until relocating to Arizona recently, he ran with the Boston Bulldogs, the running club started by Mike Ferullo in 2008 to help recovering addicts reclaim their health and a sense of purpose and identity separate from their addictions. “I suffered from addiction. I suffered for years, with the various problems of addiction,” Ward told the naysayers. “If I can get through that, I can get through anything. This is going to be easier.”

Ward says that running found him, rather than the other way around. “When I took up running as an aid to my recovery, I enjoyed pushing myself to run farther and farther,” he says. It wasn’t long before he’d worked up to the 100 mile distance, signing up for the Javelina Jundred in Arizona in 2016. But his goal was always to qualify for Boston.

He started to realize that people train on the Boston course all the time, so he started doing the same thing, even before he qualified. One day he ran the full course in reverse, then got a ride back to Boston to retrieve his car, and started wondering what it would be like to simply run back again. So he tried it. But then he started reading about people doing the quad, and though at first he wasn’t interested in running the course four times, eventually his curiosity got the better of him.

Two years ago he tried it, two weeks before the marathon (on April Fool’s Day), in weather much like that at last year’s marathon. He developed a problem with his foot and could only run the course three times. Several people ran with him or came out to see him. “I had so much fun, even though the weather was bad,” Ward says. “I met other runners, I made friends, I felt connected–the whole experience was a day I’ll never forget.”

He finally qualified for Boston for the first time with a 3:15 at the 2017 Maine Marathon. People started asking him if he was going to do the quad. He decided he would, starting at noon on Sunday, and finishing the first three legs around 7 a.m. Monday, doing some media interviews in Hopkinton. “Little did I know the weather was going to take a turn for the worse,” says Ward. After going out for breakfast Sunday morning, he returned to his parents’ house, and it was snowing. “My wife and my mother said, why are you going to do this? I said, ‘I committed to it. I have other runners showing up… I want to do it. Let’s go do this.'”

He almost didn’t make it to the actual marathon, since he was borderline hypothermic by the time he got back to Hopkinton the second time on the Monday morning. It was early, and after doing a few interviews, he managed to get into the school basement without being challenged, and was able to warm up, change into dry socks, rest, and consume some calories and water before going out to the start corral.

“I suffered, but being on the course in the actual marathon, it was like, holy sh-t! Look at all these people, the way they’re dressed, the trash bags, the ponchos, I thought, this is a joke, right?

“I didn’t care about my pace, I just wanted to soak it up. I stayed in the moment, despite being up 24 hours. I tried to be alert and watch people. People were trying to dodge puddles, but eventually they stopped trying and just ran through them.”

Several of Ward’s friends ran various parts of the quad with him. (He has a spreadsheet he sends around to friends, who fill in the parts they want to run with him, so he knows who to expect when.) He also used the fire station in Newton as an aid station on the third leg of his journey last year, actually taking a short nap there. This year’s quad will probably look much like last year’s. If you’re going to be in Boston, come out to the finish line area to see him off at 12 noon on Sunday.

Ward is qualified for 2020 also, and his intention is to do another quad. It’s safe to say the prospect of bad weather does not faze him.