As trail runners, our first love is running. Most of us will make any excuse to play outside. Yet, when ultra-experienced runner Linda Barton-Robbins started powerlifting to complement her trail running, she unexpectedly fell in love with it. Soon she found that lifting heavy weights not only benefited her running, it helped her tap into speed, strength, and recovery in running. “Runners love to run and that’s wonderful, but it’s also wonderful to try something new that can keep things fresh and help make running even better.”

Runners are already good at muscle endurance. Lifting heavy provides an opportunity to build power and efficiency. Barton-Robbins explains that “strength work can prevent injury, fix imbalances, and provide power and speed. Immediately, I found myself running faster and my uphill running and climbing improved. I also found that my muscles didn’t feel as tired in the later miles of an ultra. While the rest of me might’ve been tired from being out for hours and hours, my muscles still felt strong and able to go. The most noticeable effect, one I hadn’t considered before, was my recovery times drastically improved. I’d wake up the day after a long run or race and barely feel like I’d done anything the day before. It’s been amazing. It’ll propel you up those hills and keep your muscles strong for those downhills. It’s also allowed me to pinpoint weaknesses in my body I didn’t realize I had and actively work to strengthen them. We get so stuck doing one sport.”

How to get started

Just like it can be helpful to have a coach in running, starting something new requires guidance and direction. Barton-Robbins recommends having a trainer or friends who know what they are doing in the gym. Trail runner, competitive powerlifter, and trainer Meghan Burrows helped Barton-Robbins for her first several months. “Eventually, she provided me with workouts I could track and do on my own. Having Meghan Burrows train me was extremely helpful. She explained basic form for each lift. Learning those basics changed everything.”

Seeing the benefits of powerlifting does not require a large time commitment. When she first started, Barton-Robbins would lift for one hour each week, and she immediately saw results and improvements in uphill running, hiking, muscle resiliency, and recovery time. After a few months, she realized she loved lifting, and transitioned to twice per week. “I think one reason runners shy away from lifting is they think it will take a huge time commitment, when really, it’s just one time for about an hour before you see and feel results.”

Meghan “encouraged me to consider competing [at the BC Powerlifting Association Winter Open] and so it evolved into being completely independent of running. I looked at my calendar and found a four-month window when I’d be happy to not run for awhile (ahem, cold, snowy, wet, gross winter) and I focused on powerlifting (in a nice, warm, dry gym) before a competition in February. I was lifting four times per week with very little running.”

Soon, Barton-Robbins wanted to lift more and more often. Once she increased to four times per week, she saw continual improvements in running uphill, but her overall speed has slowed down. Nowadays, she is back to running four to five days per week, and lifting three days. “I run shorter on days I lift and I’m slowly building up my mileage again on the weekends. When the summer hits, I know I’ll lift less, because I’ll want to be outside more. I imagine I’ll lift only one to two times per week when the sun is shining and once I start training again for racing, I’ll lift less so as to allow my muscles to specify back to running.”

As a seasoned 100-mile runner, Barton-Robbins has decided to run a couple of shorter trail races this year. “I see myself continuing to race while balancing it out with powerlifting competitions. I am really loving lifting and even if I don’t compete again in the future, I know I’ll keep at it. And trail running is my first love. I’ll never stop that as long as my body allows.”

Barton-Robbins discovered that she was never too sore to run. She suggests timing “gym workouts to not be before a speed session or a long run. I’ve found that the day after a good leg workout, I often feel stronger and faster on those sore muscles. A good deadlift workout wakes up those glutes and propels you uphill. The more weeks you put into lifting, the more you become conditioned. You don’t hurt every time you run after you’ve been a runner for a while.”
“Runners also seem to worry about bulking up too much. I weigh the exact same as I did a year ago. Going just once per week, I didn’t notice many visible changes in my body, although a few people asked me if I’d lost weight (I didn’t) and even after four months and going four times per week, all I noticed was a bit more muscle definition. For the most part, I really look the same. I haven’t morphed into some hulking behemoth. Even if I did gain weight, it would improve my lean mass ratio, which is a very good thing!” 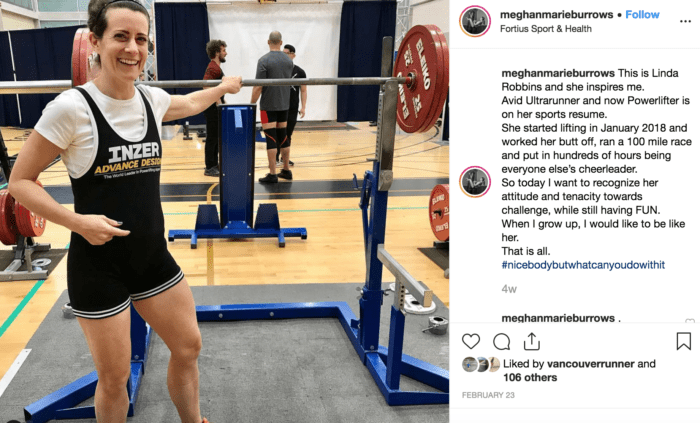 Powerlifing is unlike ultrarunning or trail running. Barton-Robbins and competing athletes are separated into age and weight classes. She competed in all three types of lifts in front of judges. “I had a fantastic personal showing for squat and deadlift. My bench did not fare as well. I failed all three attempts and essentially DNFed the competition. It was disappointing at first, but then exhilarating as it simply motivated me to seek redemption another time. I learned a lot from both the process of training and how to approach a competition. It felt so crazy to be such a newbie again, something I haven’t felt in years. I really loved it.”

Doing this new sport really helped me appreciate what else my body can do. It’s felt so good to get stronger in a new way and I feel how it can help my running as well.”
RELATED: Must-do strength exercises for trail runners