Trail running progress isn’t linear. Elite marathon runner Rob Watson’s transition to trails has been full of ups, downs, and surprises. On Friday, May 10, Watson became the official champion of the unofficial Goodr Vancouver Beer Mile 6.0 in 6:04–winning Nutella, a chocolate medal, and a jar of honey from the race director’s dad. Less than a week after his “lame sixth place” at the BMO Vancouver Marathon, the victory was not only prestigious, but excellent physical and mental training for the remainder of Watson’s racing year. 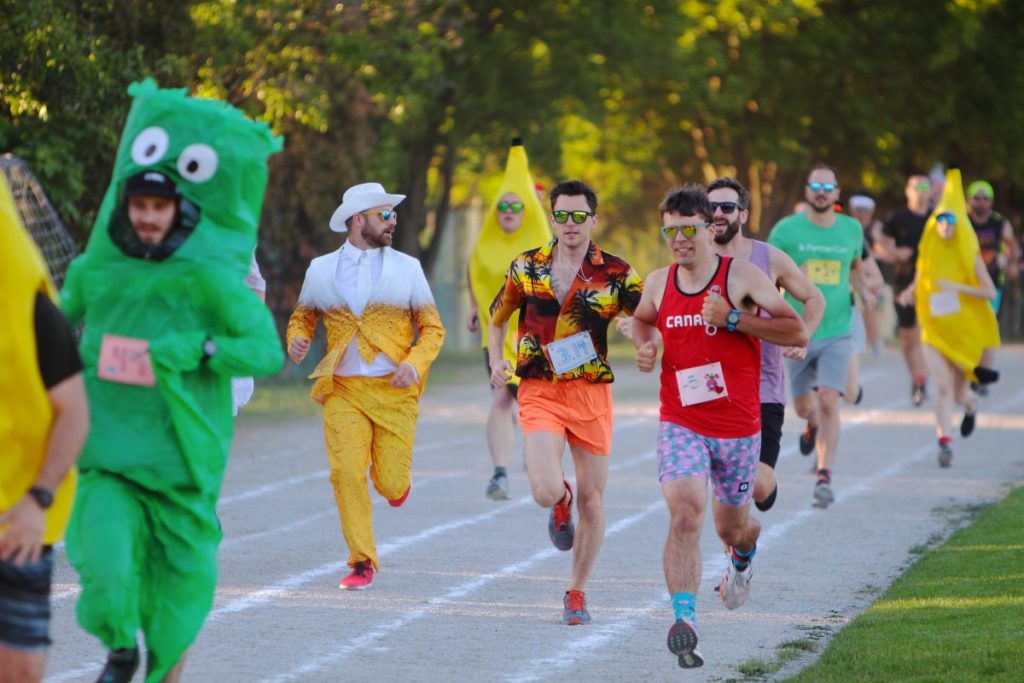 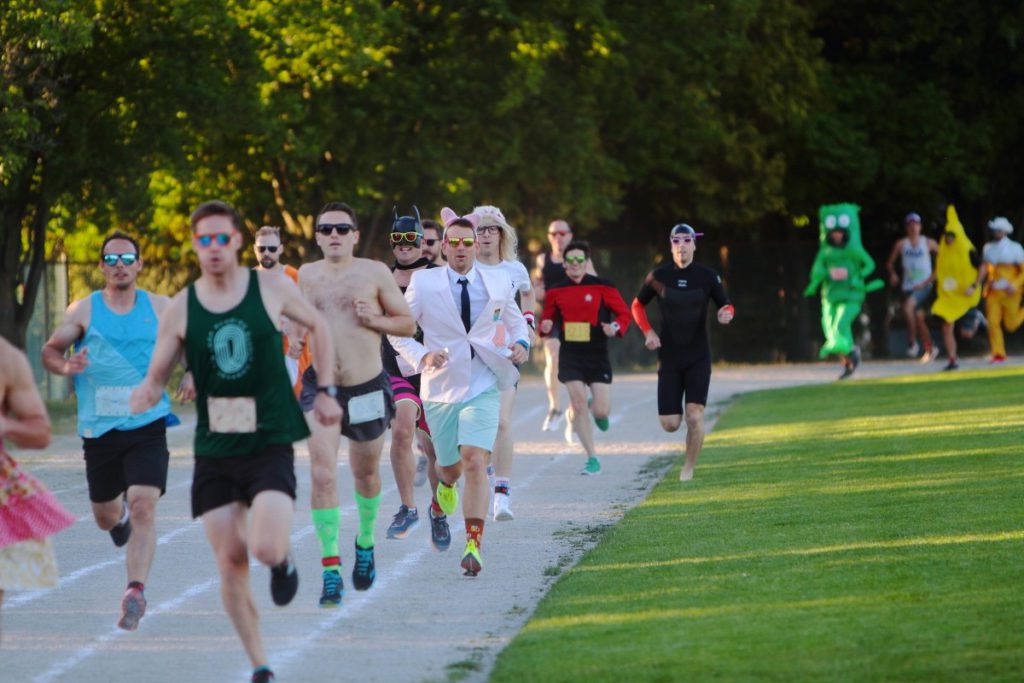 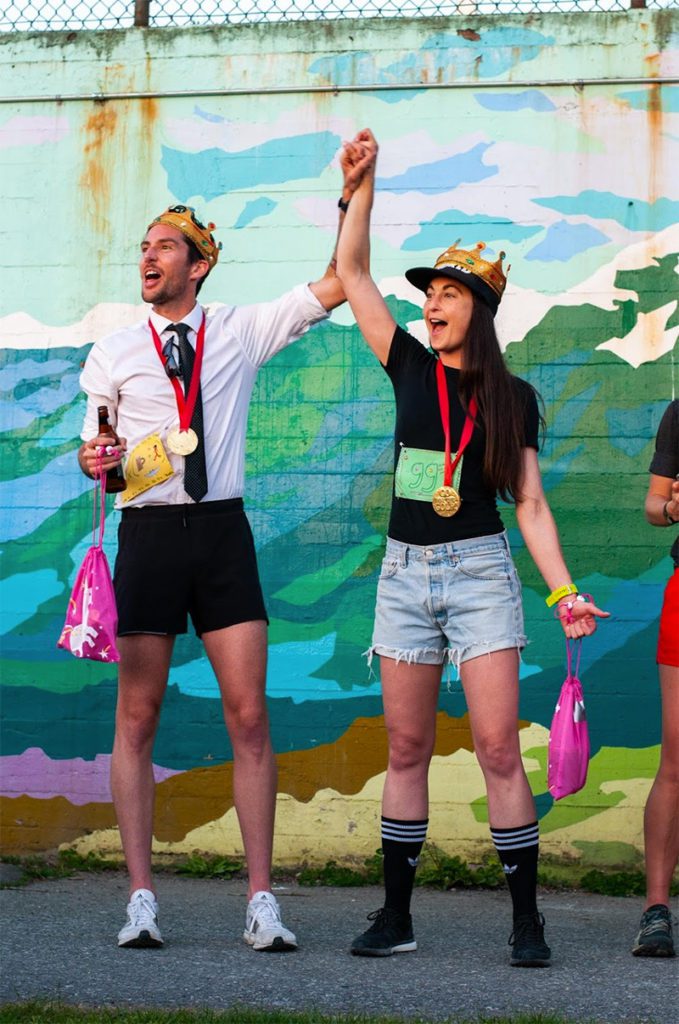 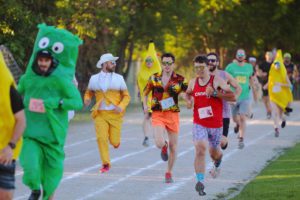 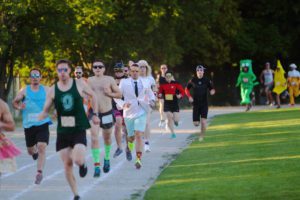 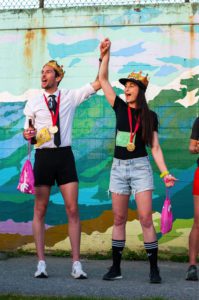 Not your average Beer Mile

In 2016, Cory Jennermann felt inspired by his friend Andrew Hall qualifying for the Beer Mile World Championships. So, he put on his race-directing hat and began organizing his own official beer mile–sponsored by Nutella. Just as trail running isn’t linear, neither was the growth of Jennermann’s Beer Mile. At the first event, four people showed up. The next time, there were two. At the sixth beer mile, 49 individual participants (39 men and 10 women), 11 relay teams of four people, and hundreds of costumed supporters flocked to the secret dirt-track location in Vancouver. Goodr Sunglasses and RunGuides.com took over the pseudo Nutella sponsorship, and SportsStats took over for Jennermann’s trusty Timex.

The sold-out 2019 version was everything Watson and Jennermann dreamed of. Runners registered by donation, but the last spot was offered at a whopping $350 (there were no takers). Lucky registered runners received a unicorn tote bag full of essentials including Goodr Sunglasses, Nutella, a giant fresh-baked pretzel, Nuun hydration tabs, a scratch and win ticket, Japanese fruit snacks, a handmade arbitrary race bib number, official chip timing, and a motivational photo of Jennermann saying, “Our greatest achievement is not that we never fail, but in rising every time we do.”

“I also am always looking for an excuse to wear a costume. Luckily I have too much time on my hands so was able to work on making this happen.” Explains Jennermann. Although the event is considered unofficial since there was no measurement of leftover beer, it was officially ridiculous. Everyone showed up in costumes, including a relay team of streakers, who dropped their trench coats before their 400 metre leg. Local runner Craig Fowler decided to complete the beer mile triathlon–transitioning from swim, to bike, to run.
Watson beat his rival and Vancouver Beer Mile 5.0 Champion Hall. Third place male Tony Tomsich, like Watson, was a week out from his second place 2:18 Eugene Marathon. Katrina Verweel won the women’s open in 9:20. A team of 65+ year-olds ran the relay in 7:42, which is speculated to be a world record. Watson quickly recognized that 50 per cent of the podium (men’s first and women’s first and second place) graduated from South Secondary School in London, Ont. Regardless of how runners placed, Jennermann bought pizzas for everyone.
Individual results from SportsStats can be found here. Relay results found here.