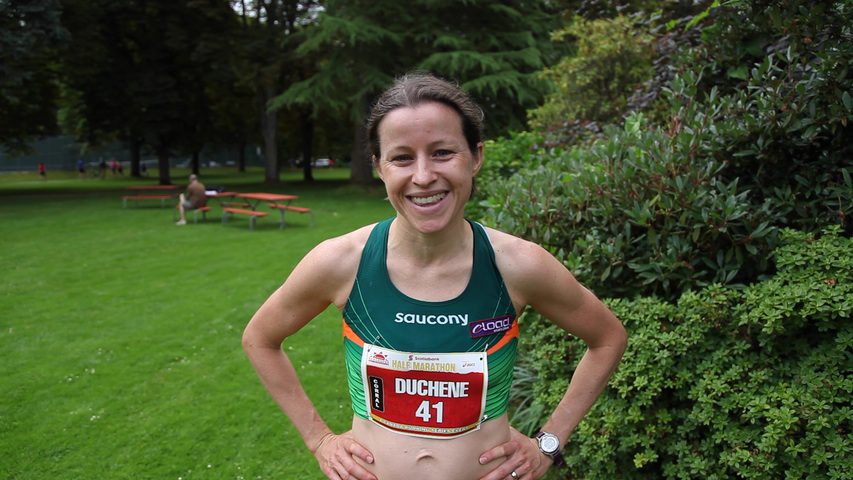 In the last few years, Krista DuChene has become one of the most impressive and intriguing runners on the Canadian scene. The 36-year-old mother of three put together a succession of massive PBs in the marathon, culminating in a 2:32:05 at the 2012 Rotterdam Marathon. That time qualified DuChene for this year’s 2013 IAAF World Championships in Moscow. Under oppressively hot and humid conditions, DuChene collapsed on the course, DNFing for the first time ever.

This Sunday in Toronto, DuChene will be seeking redemption for her difficult run in Moscow in a big way: by taking a run at the Canadian women’s marathon record.

We asked DuChene 10 Questions leading up to the Scotiabank Toronto Waterfront Marathon.

Krista DuChene: Easy answer: childbirth x3! Hands down way harder than any race – or anything – I’ve ever done!

CR: Do you have any weird pre-race superstitions?

CR: What’s your favourite thing to eat during the carb load?

CR: What’s your worst or funniest memory from running a race?

Funniest: 2012 Rotterdam Marathon. Seeing a tall and gangly Dylan Wykes in a heap on the ground after he fell at the start. Of course, I didn’t laugh at the time because I nearly tripped over him. But I still laugh to this day when I picture it… and hey, he made the Olympic standard in that race so I’m sure he doesn’t mind!

KD: 2010 National Marathon Champion in Ottawa with my husband and two sons… and daughter 9 months later;)

KD: Fast paced warm-up and cool-downs, usually because I have somewhere to be.

KD: Well, I’m a mom and registered dietitian. Does that count?

KD: Odd jobs around the house (like packing up baby things – sniff, sniff), taking my 5-year-old to his Saturday swim practice, and serving at my church and with such community organizations as the Kenyan Kids Foundation, Start2Finish, and the Canadian Cancer Society.