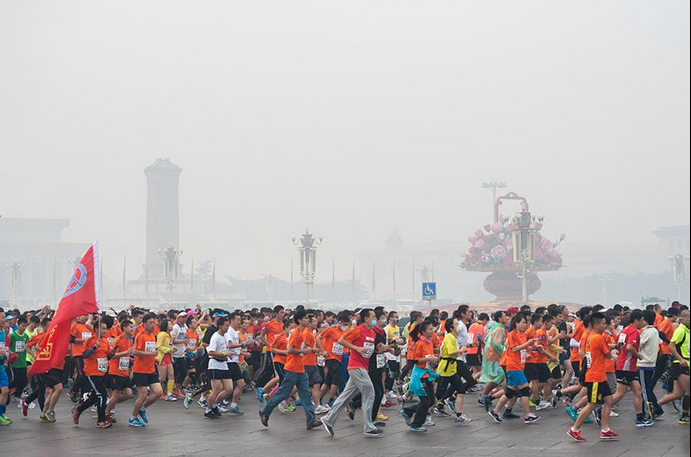 This weekend the 35th edition of the Beijing Marathon went ahead in China despite the unsafe levels of air pollution. Over 30,000 runners gathered to race though the air quality exceeded levels that the World Health Organization considers to be safe.

According to The Shanghaiist, organizers of the race had been asked to postpone the race over concerns about the health of the athletes.

But even with poor air quality, runners pulled some incredibly fast times in Beijing. Going into the marathon, the pre-race favourite in the men’s race was Ethiopian runner Berhanu Shiferaw.

Shiferaw however was beat by Mariko Kiplagat Kipchumba of Kenya. The 41-year old athlete came in for the win with a time of 2:11:00 ending the three-year Ethiopian winning streak on the course.

Kipchumba was strong throughout the marathon always running in the lead pack right from the beginning. His PB in the marathon is 2:06:05. Shiferaw didn’t run as strong as his Kenyan rival. While he was able to run up with Kipchumba at parts of the race, he fell back at the 35K mark. He finished with a time of 2:11:37. In third place was Wirimai Juwawo who ran a 2:14:25.

The women’s race was also a strong one. It was quite the battle between two young athletes. Abebech Afework and Betelhem Moges, both 24-year-old Ethiopian runners ran quite strong in Beijing.

In the end it was Moges who made it to the finish first. She made her move in the last 10K and was able to continue to open up the gap between her and Afework. She won with quite the lead in a time of 2:27:31, only about three minutes off her PB.