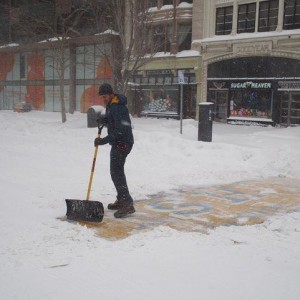 The mystery of who shovelled the Boston Marathon finish line during this week’s snowstorm in the American city has been solved.

The man who stole the show on Twitter this morning was Christopher Laudani, a local bartender and triathlete in the city.

“I only did it to send a message. I love the Boston Marathon and everything it stands for,” Laudani told Boston. The finish line doesn’t deserve to be covered in snow.”

“I’m no hero, I’m just a nut who loves the marathon. The real heroes are the people who were out there clearing the streets and sidewalks,” he continued.

The city received over a metre of snow on Monday and Tuesday, leaving the rest of the iconic marathon course covered.

@BostonDotCom The marathon finish line shovler was Christopher Laudani! He borrowed our shovel to do it!