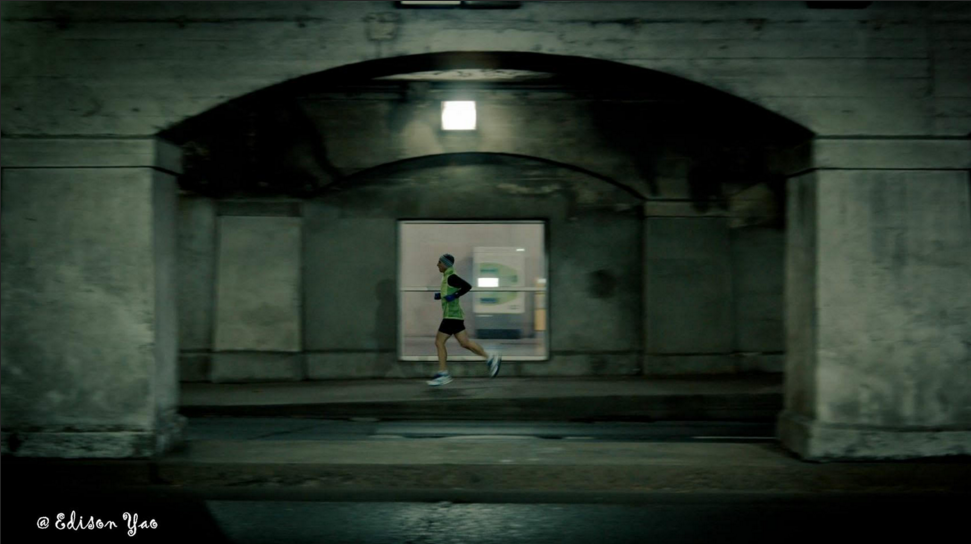 Running through the wee hours of the morning in downtown Toronto in sub-zero temperatures and gusty winds isn’t exactly a runner’s typical pre-race routine leading into the Scotiabank Toronto Waterfront Marathon. Soon after 2:30 a.m. though on Oct. 19, J.P. Bedard lined up at the start line of the iconic Canadian race ready to run the 42.2K course. This run of the marathon course is sandwiched between the two others that he has set out to complete on race day. The first started at 10:00 p.m. The third is with everyone else at 8:45 a.m.

That’s a total of 126.6K that Bedard runs to raise awareness of the physical and emotional trauma that people with a history of sexual abuse go through. He wants to use his voice to speak for those who cannot. “I don’t think it’s all about money, I think it’s about awareness,” he says. “It’s about saying ‘Let’s get this thing better with us.'” The triple marathon is also in support of Ontario’s #ItsNeverOkay campaign which aims to remind that we have a role in standing up against sexual violence and harassment.

This isn’t the first time Bedard has used running as a vehicle to talk about this issue. In 2014, he ran the Boston Marathon twice. A year ago, he started thinking about doing something similar in Toronto. When the Jian Ghomeshi scandal broke, he thought it was important to keep the conversation going in Canada. 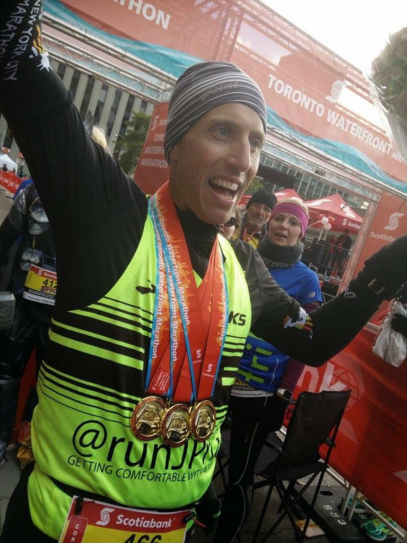 Bedard is a survivor of sexual violence himself. He grew up in Toronto in a violent household. “There was a lot of physical violence from my mom. She had a lot of her own issues,” he says. When he was nine years old, sexual trauma was thrown into the mix when he was abused by his hockey coach, also a family member. Three years later, when Bedard was 12, he was raped by two men in a Toronto ravine. “It was a violent rape,” he says. The event left him traumatized.

Bedard kept quiet about his past until three years ago when he came out to his wife Mary-Anne.

This was after spending much of his teens through to his early thirties dealing with depression, using drugs and alcohol to cope. Eventually he enrolled in a program to overcome addiction. It was there, 18 years ago, that he started running. Now, Bedard has run over 120 marathons.

He says he ran in Toronto Sunday with his 12-year-old self in mind when things got tough. The Scotiabank Toronto Waterfront Marathon is one of Canada’s most iconic running events and so it’s unsurprising that Bedard was able to drum up a strong crowd of supporters to either run with him or cheer. Among them was Ontario premier Kathleen Wynne who joined him at the start of his third marathon for the first 5K. “I’m approaching the premier and I’m pasty looking and she said ‘Hang on, you’ve got to warm up,'” says Bedard. She pulled him in for a hug. “It completely put me at ease,” he says.

With him as well was a young Toronto woman, a runner who reached out to him on recently. Like Bedard, she has a history of rape and while out for a run this past summer, she was sexually assaulted in a park. They ran the full course getting a second wind from the support they gained.

For Bedard, running has always shown the power of setting a goal and achieving it. When the two crossed the finish line at around 4:30 p.m., that sense of accomplishment was strong.

When he first came out about his past, he didn’t know what kind of influence he might have. “I wasn’t expecting how much it resonated with other people. The theme was that they believed in me and it gave them hope,” he says. “Right now, I’ve got momentum and I’m pushing it.”

Honoured to join @RunjpRun today as he runs the #STWM today for survivors of sexual violence. #ItsNeverOkay pic.twitter.com/CGGaFEnvZN