If there is one word that best describes Kip Kangogo, it’s consistency.

The kenyan born, Canadian resident won his fourth Scotiabank Vancouver Half-Marathon on Sunday, beating some stiff competition in the process.

The weather was slightly overcast and perfect for running when the horn sounded at the UBC campus. Kangogo tucked in behind Rob Watson, Willy Kimosop, Paul Kimugal and Terence Attema for much of the first half.

Kimugal set the tone in the early going, but it was Watson that laid down the first salvo at the 12K marker, where there was a tough 300m climb. Kimugal fell off the pace, but Kangogo was able to cover the move. He then settled back in comfortably and bided his time until Kitsilano Beach. There, Kangogo quickly gapped Watson, and then used the long tough grind up the Burrard Bridge to cement his fourth victory in Vancouver. He would win in a convincing 1:03:33. Watson wound up losing nearly a minute on Kangogo in the last few kilometres, finishing with a 1:04:28.

The women’s race got off to a very hot start between two friends and rivals. Lanni Marchant and Krista DuChene challenged each other to an edgy 33:00 first 10K, before Marchant fell off the pace. That left the door open for DuChene to continue her extraordinary 2013 campaign, winning in a jaw-dropping 1:10:52. Marchant would cruise in at a respectable 1:11:38, but admitted that she never quite settled down and found her stride after a rough beginning. “I got tripped up at the very start of the race and nearly did a face plant,” Marchant told Canadian Running after the race. “I tried to hang on the best I could, but my body and I decided we were at odds with each other, but I tried to keep a solid one going –I’m happy with my time and how it felt.”

Both Kimugul and Port Moody, B.C.’s Natasha Wodak would protect their positions in the race and take home respective third place finishes. It’s been a busy week for the runner formerly known as Natasha Fraser. On Thursday, she was on the other side of the country, where she won the 10,000m at the Canadian track and field championships in Moncton. “I’m happy I was still able to get under 1:15, all things considered,” she said after just squeezing by in 1:14:59.

Kimugul fought hard to keep up, but faded back to 1:04:58. He then found himself taking a brief trip to the hospital after becoming weak in the finishing chute. He later told Canadian Running that he was recently suffering from pneumonia, and would have to seek further treatment after he heads back to Kenya next week.

DuChene, Marchant and Watson all got to test out their fitness here in Vancouver with about seven weeks to go before the IAAF world championships in Moscow. Both women have long been committed to the race and expect to run fast times, with talk of perhaps even going after a sub-2:30, particularly after the feedback they received from Sunday’s race.

Watson is a late addition to the Canadian squad. He and Dylan Wykes are the only two men with qualifying times, but neither had planned to make the trip. Wykes is still recovering from injury, while Watson had initially opted to focus instead on a fast fall marathon. Last week, Watson changed his mind. “I came to the decision after talking to a lot of people that I really respect in the sport and putting things into perspective,” the 2:!3 marathoner told Canadian Running after his finish. “You never know what is around the corner and you have to take advantage of the experiences you are given. This is a great team and it’s going to be a great experience, I’m going to get world championship experience… It seemed right.”

Both Watson and Kangogo had extra motivation to run hard on Sunday.

Watson turned 30 on race day and was hoping to celebrate with a win in the city he now calls home. He would have to settle for second, but commended Kangogo on his solid effort. “Kip is just so good at the half-marathon,” exclaimed Watson. “He’s Mr. Consistency.” 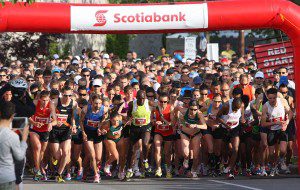 Kangogo was inspired by the birth of his first child just three weeks ago. “This was my first race running as a daddy, and it was just wonderful,” Kangogo said with a smile. “Everything changes — there’s love in the house and love in running.”