Ontario’s premier went on a trip to India and participated in a one-kilometre run with one of the country’s well-known runners. 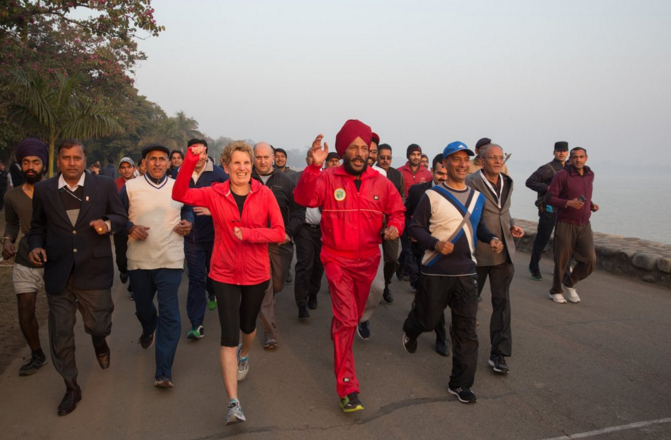 Ontario’s premier Kathleen Wynne is making headlines in the running world again. Wynne, was in India on Wednesday, Feb. 3 on a trip leading a trade delegation in Chandigarh when she met up with well-known Milka Singh, a former 400m champion best known by his nickname “The Flying Sikh.”

The two met up on Wednesday to complete a one-kilometre run together in the area of Sukha Lake. They were accompanied by police on their run for security measures.

Wynne has been a life-long runner and at 62, she’s not slowing down. In her high school days, she held the province’s record in the 440-yard dash.

As for Milkha, “The Flying Sikh” is celebrated runner in India. In the 1958 Commonwealth Games, he won gold in the 400m and he represented in the 1960 Olympics running the same event.

Though his age is unknown– he says he is in his eighties– it’s undeniable that despite being in his senior years, he’s not stopping running any time soon.

This was not the first time the pair of runners have met. They were introduced in Toronto last year.

Early morning run with Olympian Milkha Singh before today’s meetings. I see why he’s known as “The Flying Sikh”! pic.twitter.com/EudjV2mh93