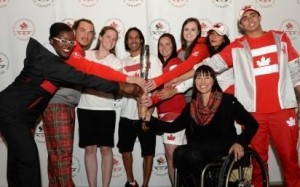 You’ve probably heard about the Scottish Commonwealth Team’s, how shall we say it, unique (?) looking ceremonial uniform for the upcoming games. Decked in blue, magenta and caramel coloured kilts, the Scots will be hard to miss.

What you might not know is that the Canadian team will also be wearing plaid in Glasgow at the upcoming games. In fact #cladinplaid is one of the official hashtags that the team is using to promote themselves. Before you consider cheering for another country, take a look at the Canadian Commonwealth Games uniforms.

For their podium and opening ceremonies uniforms, the Canadians opted for a more traditional tracksuit style approach, which is both stylish and functional for the athletes. Points are awarded to the Canadian design team for developing clothing that the athletes may actually want to wear again when the games are over.

Included in the kit are the Team Canada Tartan pants, which slightly resemble your favourite pair of cottage pajamas, but are definitely not as bad as the Scottish outfits. Paired with more athletically inspired sweatshirts and t-shirts, the Canadians may pull of the cool-kid-who-can-rock-their-pajamas-to-school-look. 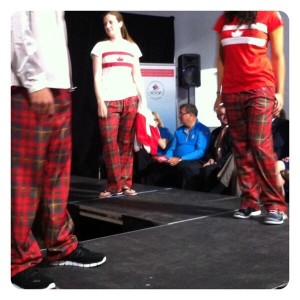 The tartan used is Canada’s own ‘maple leaf tartan.’ The team kit was produced by RMP Athletic Locker Ltd, of Mississauga, Ont. The company’s founder, Mike Dyon, is a former Commonwealth athlete himself, competing in the marathon in the Brisbane Games of 1982.

As the beginning of the games on July 23 is fast approaching, we hope the athletes are pulling on their Team Canada Tartan pants and resting up because we’d love to see them not only #cladinplaid, but also #cladinmedals.