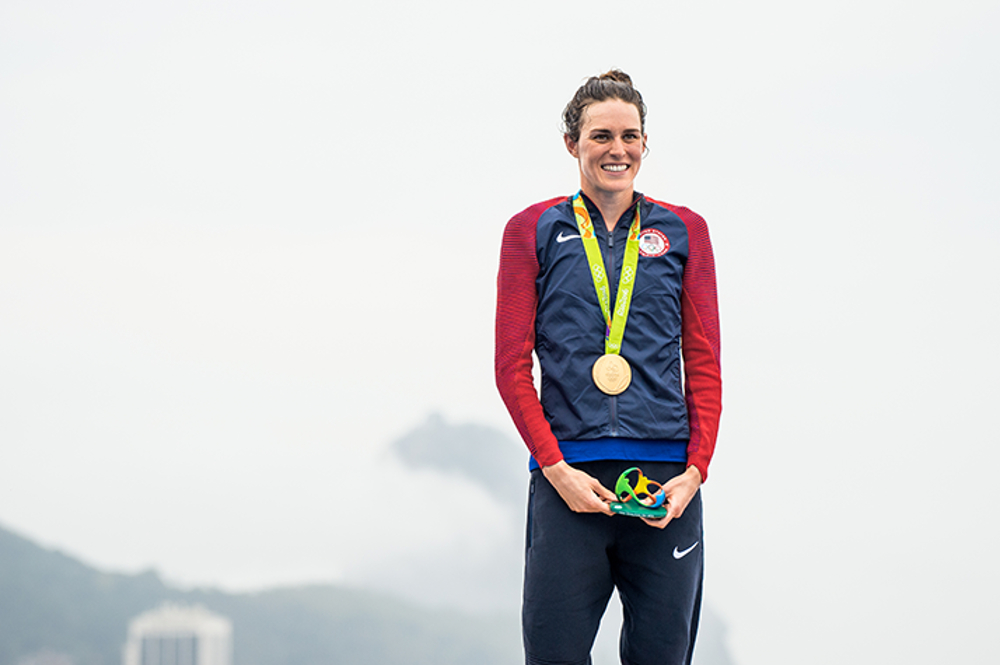 Women are celebrating a great moment in the running scene right now.

In the wake of Shalane Flanagan’s smashing performance in New York City, another female powerhouse dropped some pretty big news: Gwen Jorgensen, who won Olympic gold in triathlon in 2016, has switched her focus to the marathon. She doesn’t just want to perform well, she wants another gold medal from another Olympics but in a different event. Of there’s one thing we admire about her (other than her striking athletic capabilities), it’s her bullish determination.

In case you’re out of touch with the triathlon world and this athlete has just come on your radar now, we’re just going to just list a few reasons why we’ve become majors fans. Get ready to spotting her in Tokyo in 2020.

She splits her focus between three sports but can still kill it in the marathon.

She’s an inspiration to women who wish to stick with running while pregnant.

Last January, Jorgensen announced that she and her husband were expecting a baby. The news warmed the hearts of her fans – Canadian and American alike. She went on to become a role model for women who hope they won’t have to choose between running and pregnancy. For high-level athletes, she proved that you can have a career in sports and have a family. For recreational runners who saw her run up to 95K in a week during her first trimester, that was a confidence boost that yes, you can run while pregnant if you want to. For her tips on running through your pregnancy, see here.

#Fbf to the last time I ran. I miss it so much but my body is still recovering. I feel fortunate that I was able to run so long into my pregnancy 🏃🏻‍♀️ I attribute being able to run 🤰🏻 to strength training and a maternity belt. My choice was the Fit Splint by @recorefitness . . . #FITsplint #Recorefitness #maternitysupport #fitpregnancy

She has run with Shalane Flanagan

And had a very classy message to share on the weekend when Ms. Flanagan won the New York City Marathon ending a drought to American women claiming the highest spot on the podium. Jorgensen wrote on her Instagram: “Running is very lucky to have you.” This one gave us all the feels.

Today was going to be #stanleysunday but instead it’s #ShalaneSunday Huge honor to have been able to do a few runs with @shalaneflanagan Running is very lucky to have you.

She’s not a selfish athlete

According to Triathlon Magazine Canada, Jorgensen generously raised funds for the Leanda Cave Foundation after her Olympic performance in Rio. The foundation, created by a British triathlete, aims to create opportunities in sport for women of all ages through the sport and culture of triathlon. When Jorgensen’s name was in headlines for winning gold in Rio, she autographed her race kit and auctioned it. Nice move!