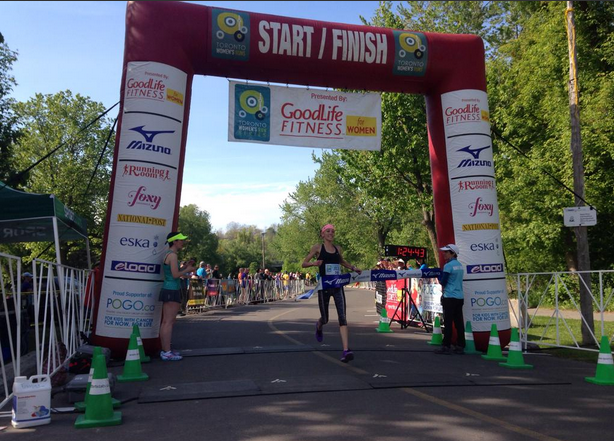 This morning, 1,400 women raced in Toronto’s Sunnybrook Park at the Toronto Women’s Half-Marathon and 5K.

Runners in the half-marathon ran along the city’s scenic Don Valley trails in an out-and-back course. The race started at 8:00 a.m. The mission of this Toronto event is to invite women to race in a supportive environment where they get a chance to be the first to break the tape. The tagline of the race is “women set the pace.”

And today women set a fast pace in both events. First to get to the finish in the half was Jolee Vanleuven who ran a 1:24:41. Lisa Bentley came behind her finishing in second place with a time of 1:25:33. In third place was Mary Catherine Stewart 1:26:55.

The 5K began at 8:20 a.m. Women at the top of the pack set and stuck to a fast pace. The top finisher was Erin McClure Robb. Her time today was 17:29. The second place woman was Lauren King, 18:09, and Donna Vakalis placed behind her running 18:17. The race is put on by Goodlife and every year they raise funds for the Pediatric Oncology Group of Ontario. Today they announced that they raised $20,000 for the charity this year.

Congratulations to my babes @jennapettinato for placing FIFTH in her age category at the @TOWomensRuns 5K! So proud! pic.twitter.com/4V0C4HwiKd

Lisa Bentley coming in for second on the 1.5 @TOWomensRuns pic.twitter.com/xa3p7adSlz