The men’s 5,000m at the European track and field championships had one of the closest finishes possible as five athletes were separated by a tenth of a second. Officials needed to use the race’s photo finish to determine the final placings at the July 10 race.

A runner’s chest is used to measure time in a track race, hence runners “leaning” at the line in an effort to edge out their competitors. The finish line judges must have had a tough time determining the 5,000m winner as the top four were separated by one-hundredth of a second. That’s very uncommon for a distance race.

Ilias Fifa of Spain (one of the athletes with the country’s yellow and red singlet in the video) was declared the winner in 13:40.85. The fifth place runner, Mourad Amdouni of France, clocked 13:40.94, less than one-tenth back. All three podium finishers had the same time, according to the results.

Ilias Fifa in the 5000m pic.twitter.com/LIuT52OUpj

Fifa is third from the inside when crossing the line. With 50 metres remaining, he was in sixth before throwing down his kick and passing all five athletes in front of him. Hayle Ibrahimov, the race’s leader with 100m to go, faded to sixth after appearing to be bumped.

The men’s 5,000m moment wasn’t the only memorable highlight of the championships. Watch this sprinter’s amazing reaction to news that he was upgraded to a gold medal after the initial winner was disqualified.

The European track and field championships were held in Amsterdam in the lead up to the Rio Olympics, set to begin on Aug. 5 with the opening ceremony. The Games end on Aug. 21. 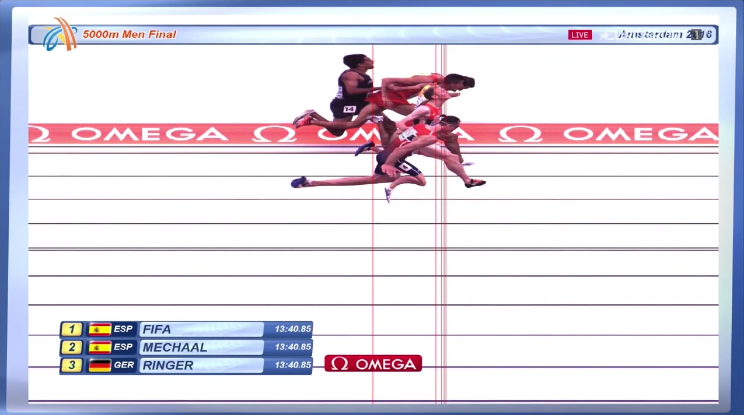