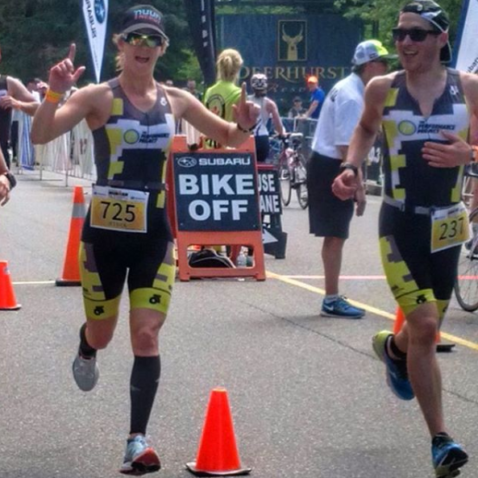 Keeping with my relentless pursuit of always trying new-to-me events and adventures related to running, I signed up to compete in a triathlon during a weekend in Muskoka.

As a runner, I was very much out of my comfort zone since I’m used to simply tacking on a bib and heading out on a race course. This time, I had to meticulously lay out my gear for three different sport disciplines. As a non-swimmer and an average-at-best cyclist, I was hoping to simply enjoy the experience and add another story to my list of misadventures.

What happened in my triathlon

Race day came. I managed to make it through the swim and as I cycled, I pretended that I wasn’t racing yet. Instead, I told myself, I was simply on a bike ride to the start line of my half-marathon. Unsurprisingly, I wasn’t in the best of race placings at this point as I was completely out of my element. But things began to change for me. As I left my bike behind, I headed out on the run and began to celebrate that I was finally in the portion of the race where I could rely on my strengths.

There is a marked difference between a run off the bike and a run with fatigued legs from culminated training volume. I have done stage races before where I headed out on tired legs every morning and that brings on a soreness in your legs that unwinds as muscles warm up. I’ve also run for days on end where soreness continues to accumulate, but nothing in my history of running has translated to this half-marathon. It was so different.

A run off of a bike ride is called a brick because that is exactly how your legs feel.  Unlike a regular half-marathon where the first five kilometres often seem to fly by, I found the first kilometres of this run were some of the worst moments of this race as I was waiting for my legs to become responsive. It wasn’t that it wasn’t enjoyable, it was simply that I was requesting my body to use an entirely different muscle set than I had been using for the prior three hours. My legs just felt heavy.

Then running saved my performance

At around 20 minutes into the half-marathon portion, my legs began to warm up. I settled into the event as if I were on a standard half-marathon race course, albeit with a slower than normal race pace. As I settled into my groove, I started to move my way up in place. I began using all of the tricks that I have learned from my years of racing. The Muskoka half course is quite difficult in that it features rolling hills with direct sunlight. It was an honest half-marathon and definitely not easy.

As in most of my other experiences racing the distance, I began to feel the race at around the 16 to 18 kilometre markings and this is when I began using a race mantra to focus on something other than how I was feeling. As I crested the hills one kilometre from the finish line, the energy from the spectators gave me a boost and I added an extra kick as I ran to the finish line.

I found out later that I had placed in my age category and upon reviewing all of my competitors splits later on, I know that it truly all came down to the run for me. I love trying new sports, new distances and new adventures but being a runner has always served me well.

For now, I am headed off on my next misadventure! You can find me on twitter @lacesandlattes and my personal blog.