In mid-Winter in Saskatoon, Tara leaves her heated home and hot oatmeal behind to observe nature’s gifts on the run despite January’s harsh chill. 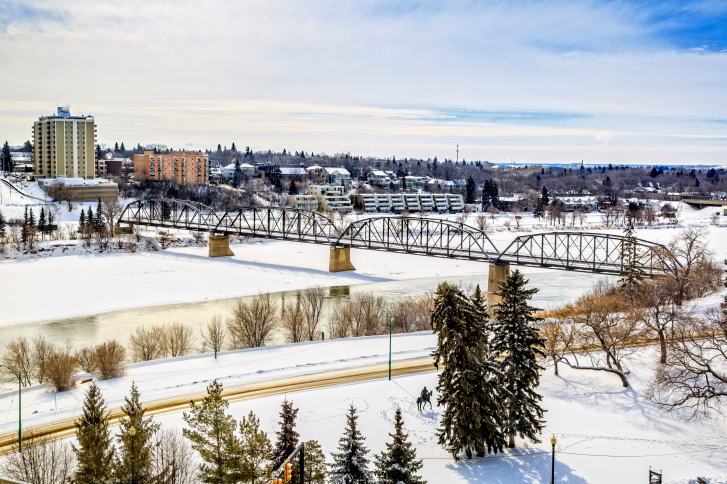 As I lie awake, warm in bed, the cold Sunday morning air meets my face — I decide it’s time to get up. In two hours, I’ll be stepping outside into -31 C for a training session with my coach, Jason, and company, but for now I’ll enjoy my hot oatmeal and heated home.

On days like this, I’m never sure what to expect. I’ve been running in these extreme conditions for quite some time, but there’s still something unpredictable about nature when it gets this prickly. Despite knowing there is a chance I will get painfully chilled by the end of the morning, I’m excited about today’s run.

Would I prefer it be a hot summer morning– sun up, muscles warm and air more breathable? Maybe a bit, but I’m still lured to running in less-than-ideal weather. Perhaps it’s because I know I’m doing something difficult, or because I’m working toward my goals. There’s satisfaction in that. Or, perhaps it’s the adrenaline that kicks in when my body realizes it’s time to go into near-survival mode. I think there’s validity to both of these reasons, however I believe there is something more giving me the will to run in such conditions.

As I layer on my clothing, I think about the place we’ll be meeting for our practice. River Landing is a part of Saskatoon that spans along the South Saskatchewan River and around, the Traffic Bridge and Sid Buckwold Bridge. It’s often home to festivals, races and weekend strolls. On this day it will be the site of an explosion as one half of the historic Traffic Bridge is brought down to make way for a new bridge.

My mind turns back to the impending cold as I get ready. We’ll be watching the explosion before starting our workout, which means I’ll be standing still for at least a few minutes. Stillness is the enemy in these temperatures. I decide it’s a two-sock kind of day and get on my way.

The cold air smacks my limbs as I step outside, while my lungs quickly recognize the rapid drop in temperature and adjust. I settle into my stride and take account of whether or not I’ve done a sufficient layering job — so far so good.

Ten minutes later, as I approach River Landing, I start weaving through crowds of people gathering to watch the explosion. Within minutes a warning-signal sounds and then a loud blast comes accompanied by snapping and electrifying explosions. It takes the structure down in mere seconds.

As it lay resting, broken and lodged atop the waters that once flowed freely beneath, I’m struck, not by the power of the explosion, but rather by the power of nature. The massive man-made structure slouches in juxtaposition with the mighty South Saskatchewan River. The steam that rises from its frozen body is eclipsed — for this moment — by plumes of smoke. Amidst this invasion, the river remains peaceful as if aware that its power is greater than any invading structure. I turn away from the scene in awe of nature’s steadfast power and grace.

We start our workout running alongside the river. As we pass, by I begin to understand the allure of running in extreme cold. As I had suspected, it goes beyond a sense of accomplishment or an adrenaline rush. When I run in these conditions, I experience a deep connection with nature. Similar to a surfer picking up a big wave. It’s uncomfortable yet calming, exhilarating yet humbling and forceful yet gentle. It’s nature in its most powerful moments — and it is a pure joy and privilege to be a part of it.