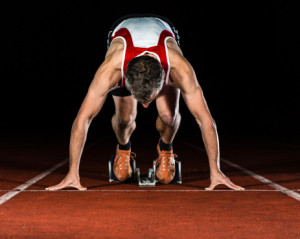 If you’ve been hitting the track regularly with the lofty ambition of one day emulating Bolt and winning gold in the 100m, you might want to reconsider your next series of repeats.

A recent study published on the Social Science Research Network sought to explore whether the influential yet controversial “deliberate practice model” (DPM) could be applied to running fast, specifically to sprinting.

According to the DPM, in order to achieve expertise in a particular area, be it playing the piano, excelling at scrabble, or a sport such as running, a significant period of time, often quoted as at least 10 years or 10,000 hours of deliberate practice, are necessary to achieve the highest level of success. This seems to go against the time-tested theory of running and training which suggests that an athlete reaches their peak running success after approximately seven years of focused training.

The study, actually a number of smaller, separate studies, sought to test the DPM within the realm of sprinting (i.e. running really fast for short periods of time). The first study reviewed the running biographies of 15 Olympic sprint champions, while a second study did the same for the 20 fastest male sprinters in U.S. history. In all cases, the sprinters were found to already be exceptional athletes prior to or at the same time that they took up formal training. In other words, natural talent was discovered and subsequently nurtured through a formal training and development program. In addition to this, most of the athletes reached their peak (world class status) within a relatively short period of time (three years in the first study and seven-and-a-half years in the second).

So what exactly does this mean and why does it matter?

Well unfortunately, for many of us, it seems that no matter how hard we train or for how long we practice, if we’re not successful right away (i.e. within a few years), our Olympic aspirations and podium appearances will continue to occur only in our dreams. In short, we cannot be made into champions regardless of how badly we want it. In this battle of nature versus nurture, sadly, nature wins.

Granted, this study looked exclusively at the fastest and shortest variety of running and cannot be directly applied to longer distance and endurance training, which in fact requires a much longer period of adaptation and conditioning. Rather, the study suggests that the DPM does not apply to sprinting specifically. However, because speed is foundational and important, vital even, to a number of other sports, distance running included, it can extend to challenge the DPM more generally.

Please understand that I’m not trying to say that we should give up what we’re doing or that all the time and energy we spend in training is a waste. Working to be the best versions of ourselves is a noble and satisfying endeavour and should be an important motivation for why we run and train as much as we do. Over time and with training, you will almost certainly continue to improve and see gains to your running and performance, which is an exciting part of why we run.

This study, and others like it, simply suggest that being a top level athlete, just like any expert in any field, is to some, perhaps a great degree determined by our our genes. But just because we will never win a gold medal or participate in the Olympics does and should not deter us from seeking to improve and be better than we were the day before. And for all of us recreational athletes out there, that will continue to mean putting in the time and energy and yes, even pounding out those track repeats again and again.