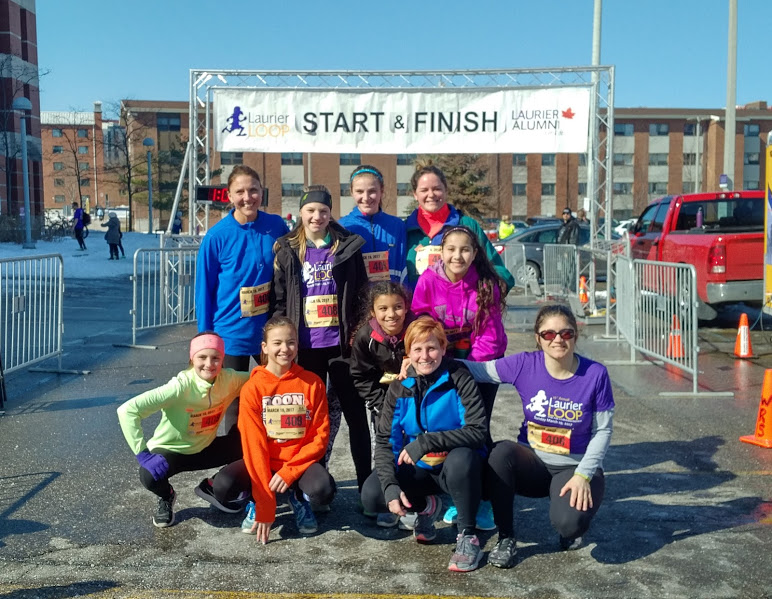 Over the weekend, I participated in a rather unusual style of event. I headed to one of Ontario’s universities– Wilfrid Laurier– to compete in a “moms versus kids” race with my daughter and her basketball team. The race looped through the campus in Waterloo, Ont.

The idea behind setting up this race was to encourage my daughter’s team members during the natural break in the basketball season and while everyone was enjoying March Break. In some cases, this time off of school also caused a natural break in our daughters’ fitness levels. Because the Laurier Loop fell on the last day of March Break, it was a natural fit. It will also help them prepare for a big tournament in Michigan in less than a week.

RELATED: Um… what’s a vision board and why is it the next most powerful running tool?

Though I’ve been committing to one race per month for over a year now, this was the first time that I had participated in a relay. The relay was a great option, as each runner had a 2.5K leg to make up for a total of 10K. It was a good distance as an introduction for several of the parents and young athletes, who had never raced before.

As for the moms, we already have plans to bring our running gear to the girls’ weekly practice and even to the tournament this weekend so that we can steal some time away to pay attention to our own fitness. The smell of spring in the air added bounce into our steps and we have renewed energy after a long season of sitting on the bleachers.

By all accounts, it seemed to be a success. Both parents and the girls enjoyed it and we all went for ice cream after the race. I heard one teammate say that we should go into a race every weekend (though I’m not sure where they would be able to squeeze in basketball). I do anticipate more races in the team’s future. Once the season is over, the athletes miss each other terribly. After being together multiple times per week training and playing together in intense situations, it is a hard stop when the season ends. Participating in races is a great way to keep the teammates connected, while continuing to challenge themselves and keeping their fitness levels up. Another plus is that it gets us parents off of the bleachers and running with them side-by-side.