Steve Magness recently published his new book, The Science of Running. He’s a collegiate track and running coach at the University of Houston. He’s also coached with the Nike Oregon Project for over a year alongside Alberto Salazar.

John Lofranco caught up with Magness to talk about some of the training methods he touches on in the book.

Can you start by telling me what prompted you to write the book, and what experience do you have that gave you the confidence to put it out there?

It actually started back when I was in graduate school. I was in the middle of writing my thesis, reading all of these research articles, while at the same time trying to sharpen my coaching, and I couldn’t help but be disappointed how both worlds. Scientists and coaches seemed to ignore each other. Fast forward a few years, and I decided it was time to finalize those thoughts and see if I could do a better job of synthesizing the science and art of coaching.

After graduate school, then coaching at Nike and in the collegiate ranks, I was confident I could pull it off. But in the end, this book wasn’t really written for anybody. I wrote the book I wanted to read. I devour training books and have read pretty much everything from the 1950’s to present I could get my hands on. So this book wasn’t about pulling it off and putting it out there, but instead about simply writing a book that would satisfy my pretty high demands. 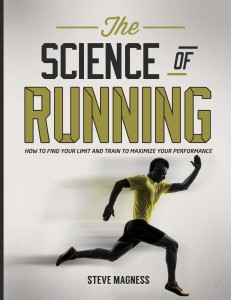 At the end of Chapter 9 you mention that “in order for hypoxic training to increase RBC mass, a sufficient intensity and duration is needed. The intensity must be high enough so that a drop in oxygen saturation occurs, while being low enough so that sufficient time can be spent training at that intensity for the pathway to be activated.” What are the correct duration and appropriate intensity?

We don’t fully know. There’s a large individuality to what makes that oxygen saturation drop. What research tends to tell us is that we need an intensity at close to, or faster than, lactate threshold. Not much is known besides that. Theoretically, fast twitch runners should see a drop in oxygen saturation before a slow twitch runner will, but, when you’re looking at that specific of a parameter, it really depends if oxygen saturation is a limiter or not. For example, when I’ve been up to altitude and you strap an oxygen saturation measuring device on someone’s finger, some will see decreases from just jogging around at altitude, while others it will take until they get running pretty fast. The difference at altitude is that some runners are really poor at getting that oxygen in and then to transfer from the lungs to the blood.

At the end of Chapter 7, you note that, in cycling, using energy cost was a better measure of efficiency than simply RPMs, and that, in running, using stride rate and length could offer the same window. You end with “The problem isn’t with the importance of economy or efficiency, but with the actual measurement used to define economy.” What should that measurement be for runners?

It’s funny, when I wrote that in the book I was hypothesizing based on data from cycling. Then, a few days after I published the book, a study came out comparing the traditional measure of economy versus energy cost. It turns out that it’s the same in runners, which I guess isn’t too surprising.

It seems what this last study is saying is that Kcal/km is the best way to measure it. Is there a more practical way to measure it? Or is this another case like VO2max where knowing the actual number is not really all that useful, as the training isn’t all that different anyway?

I’m afraid it’s another case of what do we do with this number. Unlike with VO2 max, though, it seems to actually change with training. So, one thing we can do is to check to see if some of the interventions we use actually improve it. For example, we could check before and after a four-week block of strength training designed to improve economy, or before and after a change in our form. In that case, it’s useful.

In the biomechanics section, you write a lot about how to change mechanics and how a mid/forefoot strike is more desirable. Recently, there’s been some discussion that heel striking is actually not that inefficient and, at speeds slower than about 6:25 per mile, it’s actually more efficient . There’s so much back and forth on this. Why is your version the one we should trust?

Again, I think this plays to the individual nature of the runner and their biomechanics. When we look at efficiency, we have to realize that by the time most of us get into running, we’ve got at least 14 years of motor programming ingrained for how we run. So, the most efficient way to run is most likely how we run at that moment because we’ve trained for it.

The question though is if we can improve our efficiency ceiling. So, could we possibly be more efficient if we ran a certain way mechanically and took time to rework our muscle recruitment?

It’s really impossible to tell if that’s true right now because it takes long-term studies to figure it out. By it’s nature, if we change our form in a three-week training study, whatever way we change our form will most likely decrease efficiency. In an extreme viewpoint it’s as if we started writing with our left hand after writing with our right hand for all our life. Even if we were “supposed” to be left-handed, it would be way more inefficient at the beginning.

All that being said, speed plays a role and individual physiological characteristics. The faster that you run, the less ground contact will be, the less time we have to put force into the ground, and the more time we have to rely on elastic energy. The slower we go, the less elastic energy reliance happens. So there’s going to be a point, which should very with every runner, where heel striking should be more efficient.

The sample training plans are all about 20 weeks long. Is there an advantage to cycling through two builds in a year, or is it desirable to do a full-year periodization?

It depends on the athlete and the goal..

If your race schedule allows flexibility, I look at it in this way: it depends on how long the attributes you need to build up are going to take. For example, if we have a runner who really has to develop his aerobic abilities, he might need to spend a long time emphasizing that. So, you might choose a single, longer periodization scheme where you spend a large bulk of the year hitting that high end aerobic work. You might race cross-country or fall roads while doing this, but it’s part of a single, longer periodization.

You spent some time working in Oregon with Alberto Salazar, yet he does not appear on your list of coaching influences. What did you learn there?

In Oregon, I really took away a lot of lessons. It helped shape me as a coach. I really learned who I was as a coach and what my own style would be.

Above all, though, I think you learn from the athletes, and working with the quality of athletes there, you really see the limits of human performance and understand what it takes on several levels.

One of the unique things I took away was the individual difference between athletes at that level. For example, Rupp would continually have more impressive workouts than Farah, but that was due to Rupp’s incredible ability to recover, which is almost superhuman, while Farah had his own talents that came out more in the races. The point is, you’ve got to figure out what works for each one and where their strengths and weaknesses lie and attack them with precision.

Whether it is elite or high school runners, you are, surprisingly, fighting many of the same battles. The same issues I have heard on the college team are issues you battle with elites. So, strangely, what I brought away most is that coaching is coaching. It doesn’t matter the level; every individual brings their own unique challenge.

Magness declined to comment further on his relationship with Alberto Salazar.

This interview has been edited from its original form.