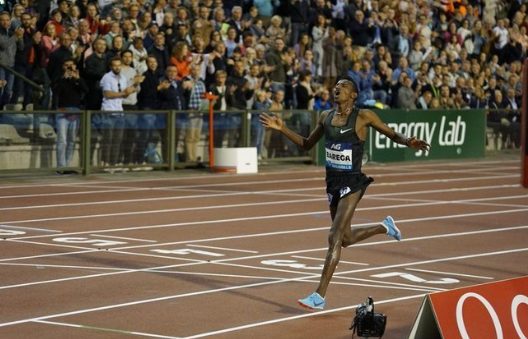 18 year-old Selemon Barega of Ethiopia out-kicked Yomif Kejelcha to win the Diamond League 5,000m final and set new new U20 world record. The teenager also obliterated the previous 2018 world leading time by over 20 seconds, and set a Diamond League record, along with a new personal best. He ran 12:43.02 to finish the race.

What did these 5k boys have for breakfast ??? 🤷🏼‍♂️ #BrusselsDL

No one had gone under 13 minutes in the 5,000m in the 2018 outdoor season, but Friday’s race changed that. Eight runners ran sub-13. Unfortunately, Canadian Mohammed Ahmed was the first across the line in over 13 minutes. Ahmed still had a very impressive showing, finishing ninth after being left in a chase pack for the majority of the race. Ahmed’s finishing time of 13:03.08 is just over a second off of his Canadian 5,000m record.

RELATED: Mohammed Ahmed is looking for a win in this week’s Diamond League final

In the women’s 3,000m steeple, world record holder Beatrice Chepkoech comfortably took the win. Chepkoech ran a blazing first kilometre to set the tone for the race, before reigning it in in the second kilometre. She pulled away from the field with 400 metres to go, finishing in 8:55.10, which is a new meet record. She ran 8:44.32 at the end of July to set the steeplechase world record in Monaco.

In the women’s 1,500m, Laura Muir of Great Britain ran a perfectly timed race to take the win in 3:58.49. Muir was very patient through lap three, and timed her kick perfectly. Muir held off American Shelby Houlihan and Sifan Hassan of the Netherlands.

Christian Coleman of the USA won the men’s 100m in an easily. He finished in a world leading time of 9.79.

The men’s 800m saw a victory from expected winner Emmanuel Korir. Korir was strong into the final straight and finished in 1:44.72.

The Brussels Diamond League final caps off the 2018 Diamond League season. The last major event of the track season is the Continental Cup which goes September 8th-9th in Ostrava, Czech Republic.