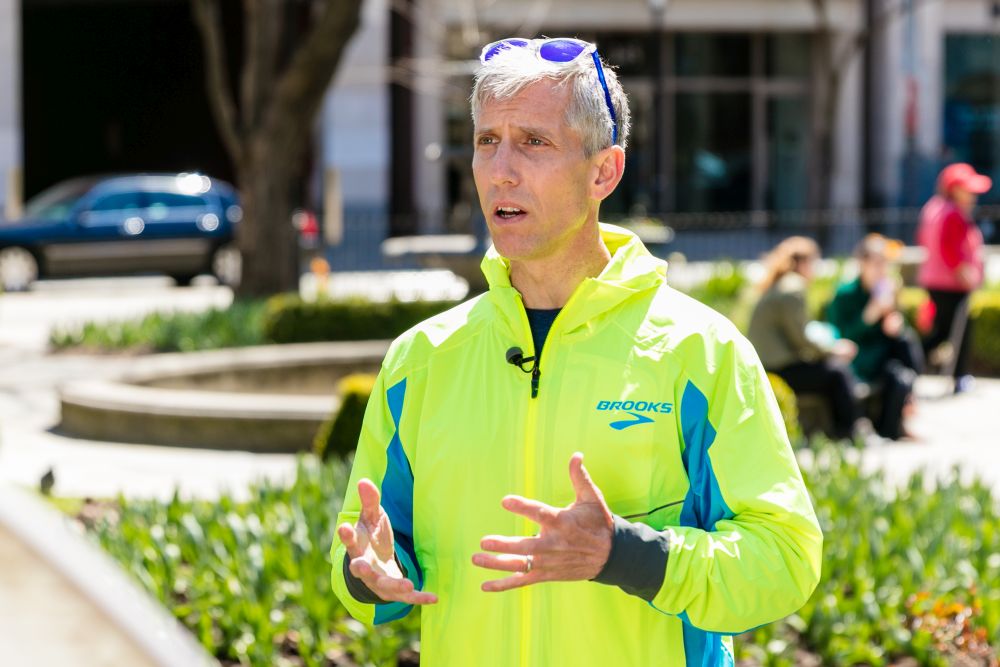 The Scotiabank Toronto Waterfront Marathon is one of Canada’s biggest running events which is going to draw hoards of runners and crowds of spectators to the Ontario capital’s downtown core on Oct. 22. In the midst of the pack will be one runner whose name most past participants of the race would recognize by now: Jean-Paul (J.P.) Bedard. The avid runner will be running the marathon not once, but six times this year as he continues to use his running to benefit survivors of sexual trauma and abuse. A survivor himself, Bedard runs to empower others and be the voice for those who are silently suffering. It’s not the first time that he’s run the Toronto course multiple times for this cause either: last year, he did four times the distance of other runners and in 2015, he completed the 42.2K three times over. We got the opportunity to ask Bedard a few questions about this year’s challenge. Here’s what he told us.

Canadian Running: What’s the significance of completing six this year versus four or three?

Jean-Paul Bedard: I could give you a big beautiful answer here about how running empowers me, or how running allows me to keep pushing those boundaries I believe exist inside me… But really, that has little to do with what drives me to attempt these multiple marathon events. When the media, and to a greater extent the general public, hear about what I’m doing, they immediate question is “Why?” That’s when I am grateful for the opportunity to reply that in Canada alone, one in three girls and one in five boys is a survivor of childhood sexual abuse. I’m “the face” of one of those statistics, and chances are you, someone in your family, or someone you love is among those statistics as well. Let’s talk about it, let’s remove some of the stigma and let’s lift the silence so that survivors can find the support they need.

CR: What are your charities and why did you choose them?

JPB: I’m running in support of two charities– The Gatehouse (here in Toronto) and Little Warriors (in Edmonton). Both of these organizations help survivors of childhood sexual abuse and their families get the support they need to rebuild their lives after childhood trauma.

CR: For those who are reading about your story for the first time, explain how the effects of your past led to you to want to become the voice for those who are silently struggling after sexual assault.

JPB: I was sexually abused by my hockey coach when I was nine, and a few years later, I was violently raped by two men in a ravine. For many years, the sexual trauma I lived through as child continued to have an adverse effect on my life as an adult– I struggled with drug and alcohol addiction, experienced precarious mental health, and ultimately became suicidal. I turned to running when I sobered up in my early thirties and through running, I started to rebuild my life. It has allowed me to reconnect with my body, something I had believed was weak and unworthy. Running saved my life. The Gatehouse gave me a “voice” and my profile as an athlete has allowed me to connect with others in our community who see their “story or resilience” in me. I’m certain of one thing, and one thing only –stigma is silence and many lives each day are lost to silence.

CR: Who is running and cheering with you and why will their support empower you?

JPB: My number one supporter is and always will be my wife Mary-Anne. In addition to her, I will have many people running or cycling beside me, or cheering me in on for a few kilometres of my 253.2-kilometre run. I’m surrounded by an incredibly inspiring group of individuals called “JP’s Team” but more importantly, I’ll be carrying the heart and strength of the thousands of survivors from around the world who have contacted me saying: “JP, you are running for me, you remind me that I, too am strong and resilient.” If anyone reading this would like to come out to support this run, by all means, please send me a message at runjprun.com.

CR: As a survivor yourself, what’s something that you would like members of society to keep in mind when thinking or talking about these cases. How can others be of support?

JPB: There are so many ways I can respond to this question. I guess what I’d really like to say is that I don’t believe you need a PhD, or to be a therapist, a psychologist, or a psychiatrist to be an expert in how to respond to trauma. What every survivor needs is a safe place. (S)he wants to be believed. (S)he needs to know that they are not broken. My advice to everyone reading this is to reach out to someone who may be struggling. Be that lifeboat. Be that parachute. Be that place of safety and unconditional support.

CR: You’ve completed similar challenges in the past. How do you mentally pull through such a long haul?

JPB: I had “Romans 8:18” tattooed on my arm. For those not familiar with that Bible verse, it’s: “The present suffering can not compare to the glory that will be revealed in you.” And that verse perfectly sums up the mental, physical, and spiritual strength I’ve returned to time and time again throughout my life.