Canadian three-time Paralympian Brent Lakatos won the Berlin marathon yesterday, in 1:29:41. It was Lakatos’s first marathon victory, and it happened on the same day that Kenyan runner Eliud Kipchoge smashed the world record with his 2:01:39 performance. 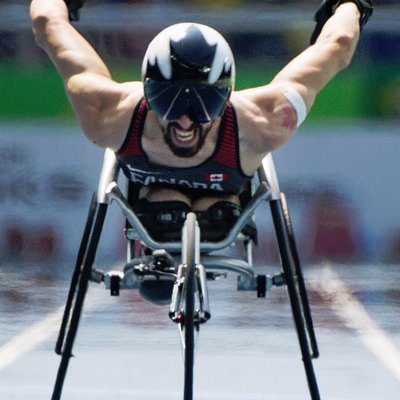 THE VERDICT | @BrentLak 🇨🇦 on the new #AbbottWMM bonus sprint points: "It was a mini race inside the race. It was fun!" 💨 pic.twitter.com/VHW3UiA8lL

Manuela Schär of Switzerland successfully defended her title and set a new world record in the process with her 1:36:53 finish. American Susannah Scaroni was second, in 1:41:44, and Sandra Graf of Switzerland was third, in 1:42:55.

Lakatos is 38, and though he’s from Dorval, Que., he currently lives in the U.K. with his wife, British paralympic sprinter and long jumper Stefanie Reid.

14 years ago the Paralympics got almost no coverage in Canada, in fact I didn't know the Olympic Rings weren't the Paralympic symbol also. Today a Paralympic athlete can be named to Athlete of the Year. #ProudCanadian #StillWorkToDo https://t.co/9IviPUEpBS

Earlier this year Lakatos was named Athletics Canada’s Athlete of the Year, beating out finalists Melissa Bishop and Mohammed Ahmed for the honour.