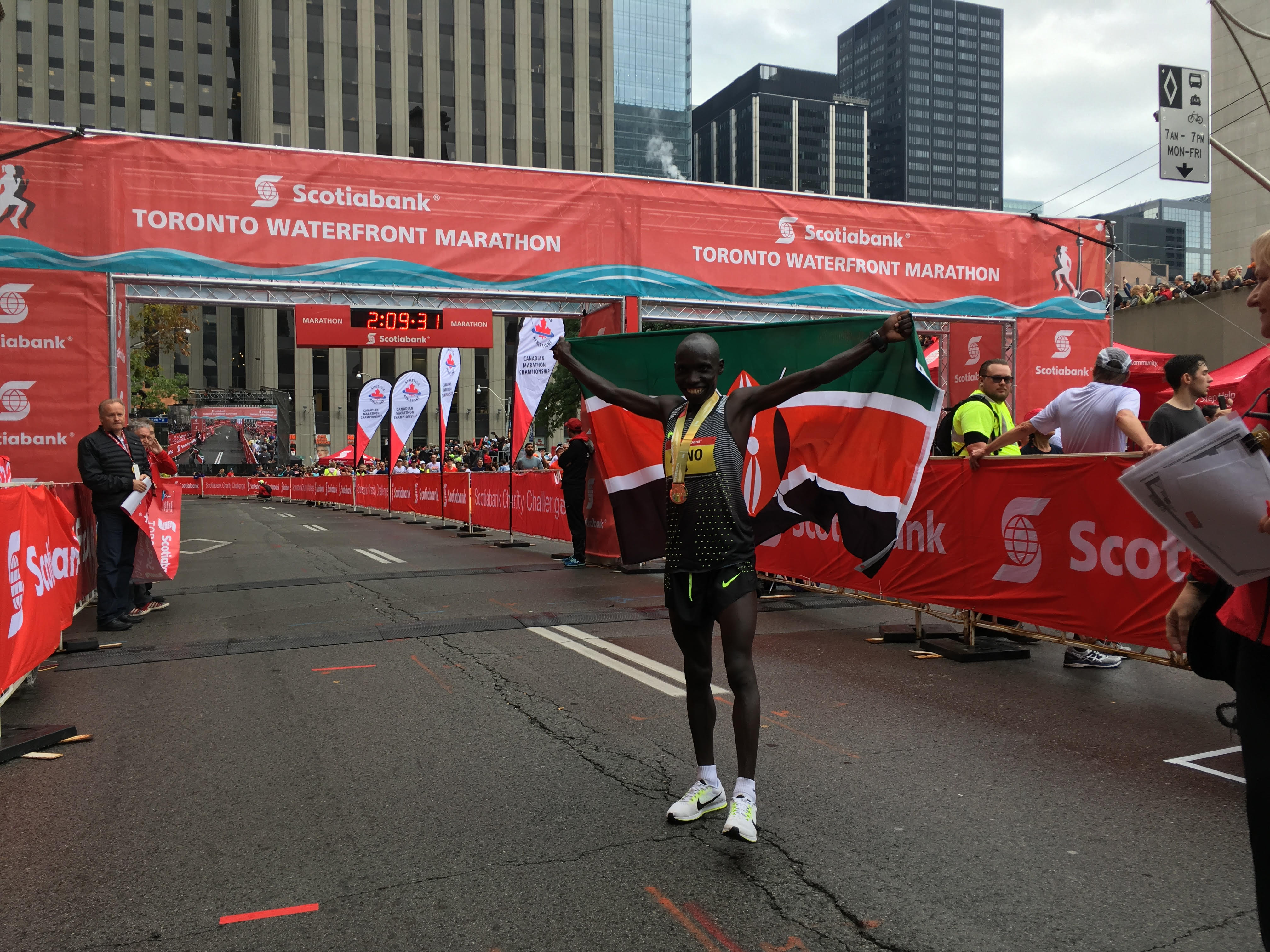 Philemon Rono has taken the win for the 2016 running of the Scotiabank Toronto Waterfront Marathon after smashing his head moments before the start. He was stretching near the start line, when a guard rail fell on his head and he may have fallen unconscious. He went on to run and win the marathon with a 2:08.27 race.

The runner didn’t just win– he took the win easily opening up quite the gap between himself and Seboka Dibaba of Kenya. For a while in the latter stages of the race, spectators even wondered if he’d take down the course record of 2:07.05.

Going into the race this morning, eyes were on the two leaders from last year: Ishhimael Chemtan and Gilbert Kirwa. In 2015, less than a second separated the two as Chemtan took the lead. Today, Chemtan placed fourth in 2:12.22.

This year, athletes were treated to unseasonably warm temperatures of 18C. It was also rainy and humid on the course giving runners opposite conditions from the snowy weather of the 2015 race.

In the women’s race, 20-year old Shure Demise returned ready to run competitively to defend her title. That’s exactly what she did on the streets of Toronto today. The Ethiopian ran at the front of the pack with Tadelech Bekele being her strongest competition.

At the halfway mark, the women clocked a 1:12.07. Heading into the 30K of the marathon, both looked confident and smooth in their running and it seemed as if either woman could make the break to win. In the end though, it was Demise who made the move shaking off her Ethiopian competitor and running solo into the finish to clock a 2:25.19 to take home the prize dollars once again.

The Canadian story: Eric Gillis’ quest for the record 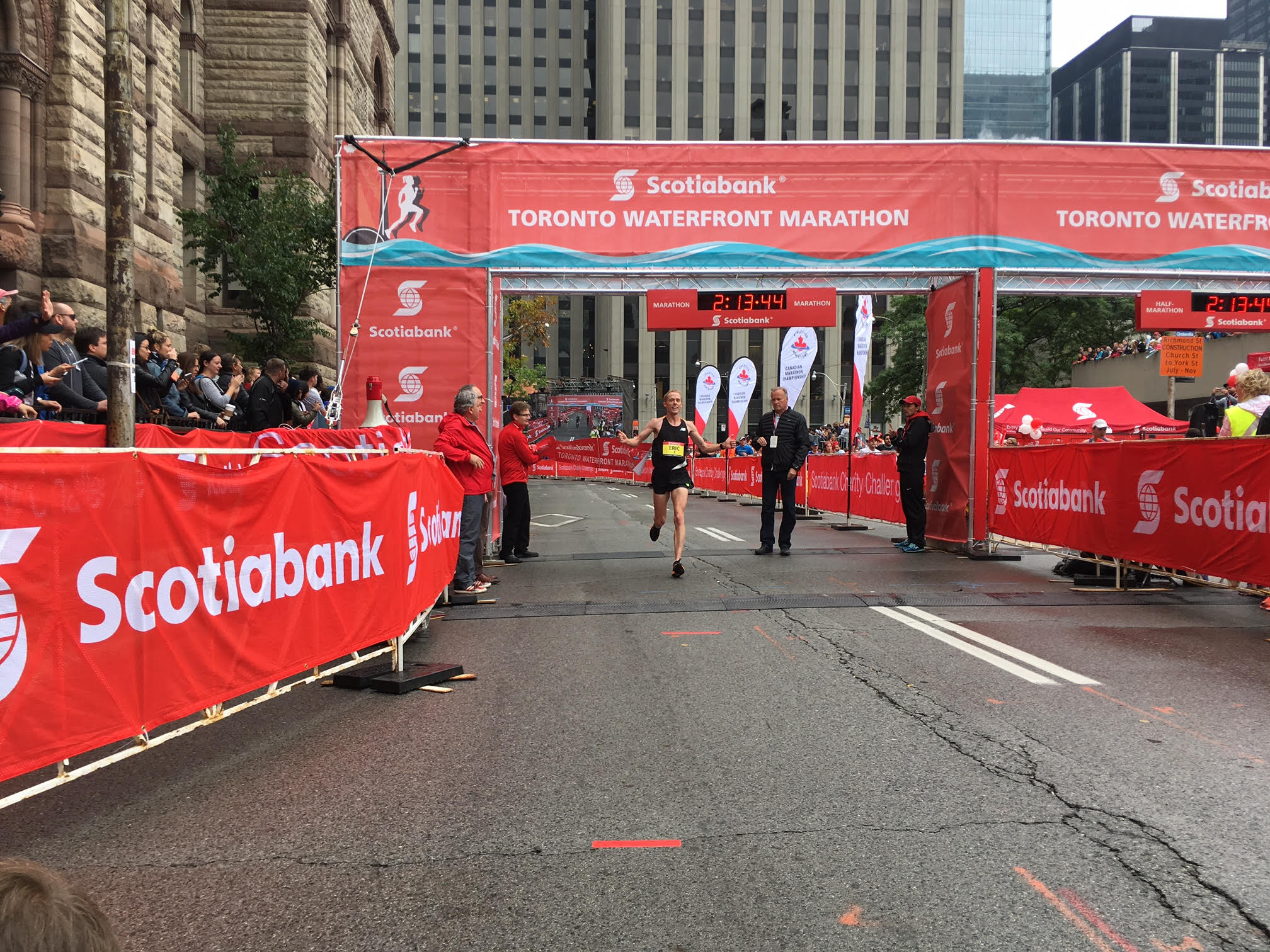 Heading into the marathon, there were a couple big questions for Canadian fans. The biggest one was whether or not Canadian favourite Eric Gillis could beat Jerome Drayton’s Canadian record of 2:10:09 set back in 1975. For Gillis, that was an extra $41,000 to add to the bank if he completed the feat. Gillis turned 36 this year and has just come off his third Olympics where he finished top ten– the best Canadian performance in the distance since 1976.

As usual, the Guelph runner started off with a strong and smart race. Early on in the race, he set the pace to break the 2:10 record, and stuck to it. He made it through 10K in 30:52 staying on pace to break the record despite the humid and rainy conditions on the course. By the halfway point, he was even set to break 2:10 running 1:04.57 set for a 2:09.53 pace. Pacing him today was Reid Coolsaet.

It’s a good thing Gillis is tough on the mental side of things. He works with sports psychologist Kim Dawson who has spoken about his mental strength when the marathon and training when it gets difficult. He would have relied on that today because by the 30K point, one of the hardest parts of the marathon, he was running alone and that continued on for the rest of his marathon.

It was around this point that he did fall off pace, shifting his focus instead to becoming the top Canadian. He later said that he had a bit of a nagging injury and was concentrating on getting through the final stages. He finished in 2:13.44 for a fifth place overall.

This is just two months after his Olympic run. “I’ve never done two that close together. It was a learning experience,” said Gillis. Kip Kangogo was also out on the course with Gillis today. The runner who lives and trains in Lethbridge, Alberta ran 2:22.15 landing in ninth place. 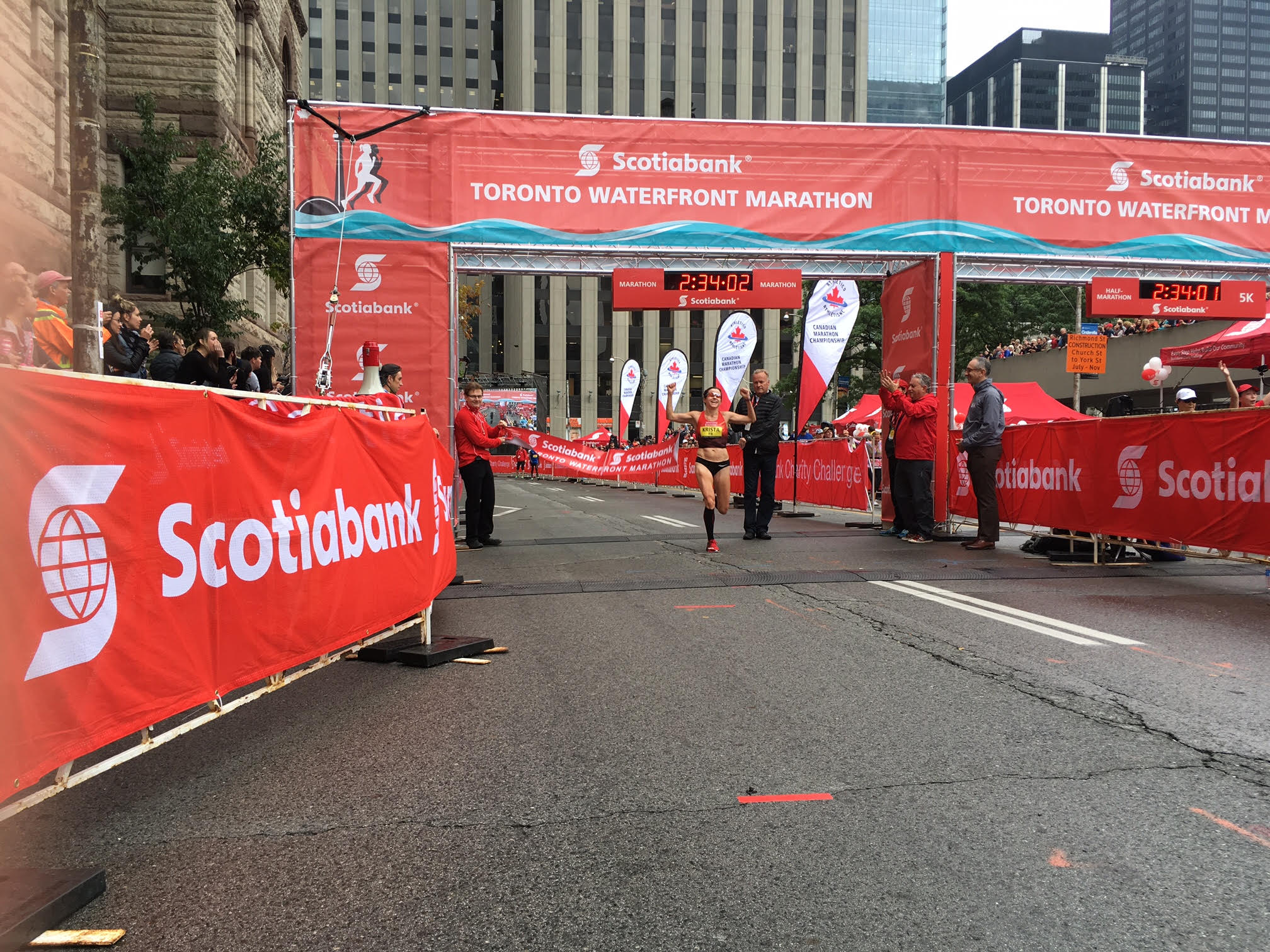 This year’s waterfront marathon came with several exciting plots and one of them was the deep field of Canadian women who competed today. Showing up the the start line to give their best efforts in the Canadian Marathon Championships this year was six incredibly talented distance runners: Krista DuChene, Rachel Hannah, Leslie Sexton, Tarah Korrir, Dayna Pidhoresky and Erin Burrett.

DuChene, having just come off her Olympic run and having the fastest PB, was the favourite. But for the first half of the race, eyes were on Pidhoresky who led the pack and put on quite the show.

Pidhoresky is a strong runner and though she attempted the Houston Marathon, she had to pull out due to GI issues. That makes the Scotiabank Toronto Waterfront Marathon her first complete 42.2K. On the course today, she pulled ahead of DuChene to lead the Canadian women. At 20K, she was in the lead making it past the marker in 1:11.07.

In the end though, DuChene’s experience in the marathon did her well. She pulled back up to take the lead. DuChene won the Canadian title running 2:33.59 just weeks after running in Brazil. Rachel Hannah, proved again that she is one of the best women in Canada right now. She hung in not far behind DuChene today and finished in second place. Her time was 2:34.34.

“I’m very happy with it. Coming second to Krista is quite the accomplishment” says Hannah. “I’m happy with the way I ran.”

While Pidhoresky fell off her pace and away from the top two women, she still nabbed a top-three finish among the Canadians. Her time was 2:40.38 for her debut. “That was the hardest race of my life,” said Pidhoresky shortly after completing her run. Leslie Sexton had a tough day in Toronto today and had to drop out before the halfway mark.