A number of the world’s top distance runners will be at the 2021 Bank of America Chicago Marathon on Sunday, Oct. 10, organizers announced today, joining headliners Galen Rupp and Sara Hall. So far, there are no Canadians featured in the Chicago Marathon elite field.

Ruth Chepngetich (Kenya), Diane Nukuri (USA) and Keira D’Amato (USA) are among the names to watch in the women’s race for the 43rd running of the Chicago Marathon. Chepngetich, who dropped out of the Olympic marathon at around 30 km, is the reigning world champion and comes to Chicago as the pre-race favourite. Hall ousted Chepngetich in a sprint for second place at the 2020 London Marathon, but all eyes will be on their Oct. 10 rematch. Chepngetich is the only East African runner in an elite field that’s deep with American talent. Could Chicago crown its first American female champion in 16 years?

The men’s field features three athletes who have run under 2:05, as well Rupp, who won in 2017. Rupp is the only individual in the field with an Abbott World Major Marathons victory under his belt. Getaneh Molla (ETH) has won the Dubai Marathon, and Hassan El Abbassi (BRN) was the runner-up at the 2018 Valencia Marathon. Rupp had a sub-par Olympic Games, finishing a disappointing eighth in Tokyo (2:11:41) after many thought he would challenge Eliud Kipchoge for a medal. Rupp will enter Chicago as the pre-race favourite, thanks to his previous success on the course. 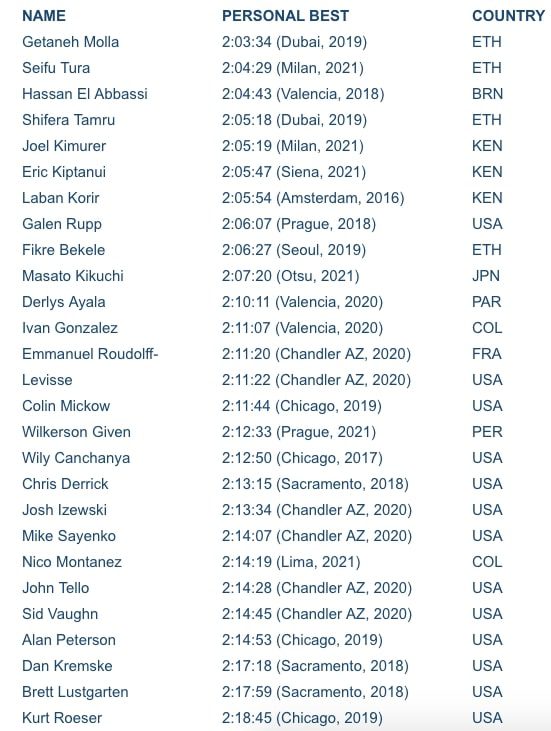 Past champions Daniel Romanchuk and Marcel Hug will battle it out in the elite wheelchair competition. Romanchuk is the defending two-time champion (2018 and 2019) and world record holder, while Hug won this race in 2016 and 2017. Hug and Romanchuk will compete on back-to-back days, in Chicago on Oct. 10 and at the Boston Marathon on Oct. 11.

IMPORTANT: The 43rd running of the @BankofAmerica #ChicagoMarathon is less than two months away. As you focus on training, event organizers are working closely with the City of Chicago to produce a safe and enjoyable experience for you and the Chicago community. pic.twitter.com/nDnFYga5j4

With the cancellation of the New Jersey Marathon, larger mass races are putting together strict Covid protocols to avoid transmission of the virus, including face coverings at the start and finish and either proof of vaccination or a negative Covid test within 72 hours of the race.

You can view the full Aug. 17 press release for race and the elites, here.