The 2018 Boston Champion, Yuki Kawauchi, won the BMO Vancouver Marathon on Sunday morning in a new course record time of 2:15:01.

Get out there and #exploreBC Yuki and Yuko are loving their visit @hellobc • • • And catch the Elite Athlete Panel, Saturday, 12pm: bmovanmarathon.ca/prerace

RELATED: Yuki Kawauchi goes pro one week out from Boston

Kawauchi finished 17th at the 2019 Boston Marathon in 2:15:29, almost the exact same time as at Boston 2018 and similar to his time from Sunday’s race. It appears the marathoner has found a sweet spot at 2:15.

I’m working on new race philosophy; “If it goes to shit, suck it up and have some fun” I have run a lot of races in my life and I’ve been known to run a bit reckless and to sometimes be a bit ambitious with my pacing. In the past when the plan didn’t work out I’d get bummed and feel bad for myself. I am really trying to have more fun on the race course these days. I gotta remind myself that I am so damn fortunate to still be doing this. At this point of @chuckanut50 my legs were gone and I was just ready to be done, but instead of sitting down and having a beer there was this massive hill they call ‘chin scraper’ in front of me. I reminded myself that I put myself in this position and that I may be a bit of an idiot, but I still gotta get up the stupid hill. I managed to power hike the hell out of the thing and make it to the top. My legs were soup but I managed to hold on and place 3rd in my 1st trail ultra. That race was fun, can’t wait for more challenges. But seriously, I gotta train harder- I left a lot of time on that course, probably a minute or two of that on this damn chin scraper! 📸 @gtach

Second in the men’s race was Feyera Gemeda Dadi of Ethiopia in 2:17:18 and third went to Canadian Luka Chelimo in 2:19:25. Chelimo is a past winner of the marathon and former course record holder. He previously competed for Kenya but it would appear that he’s recently become a Canadian citizen and he competed as a Canadian on Sunday. Defending champion Rob Watson was sixth in 2:25:10.

In the women’s race Japan’s Yuko Mizuguhi was the winner in 2:41:28, second place went to American Autumn Ray in 2:43:30 and third place to American Tara Kaur in 2:50:23. (Mizuguhi and Kawauchi are engaged to be married.) 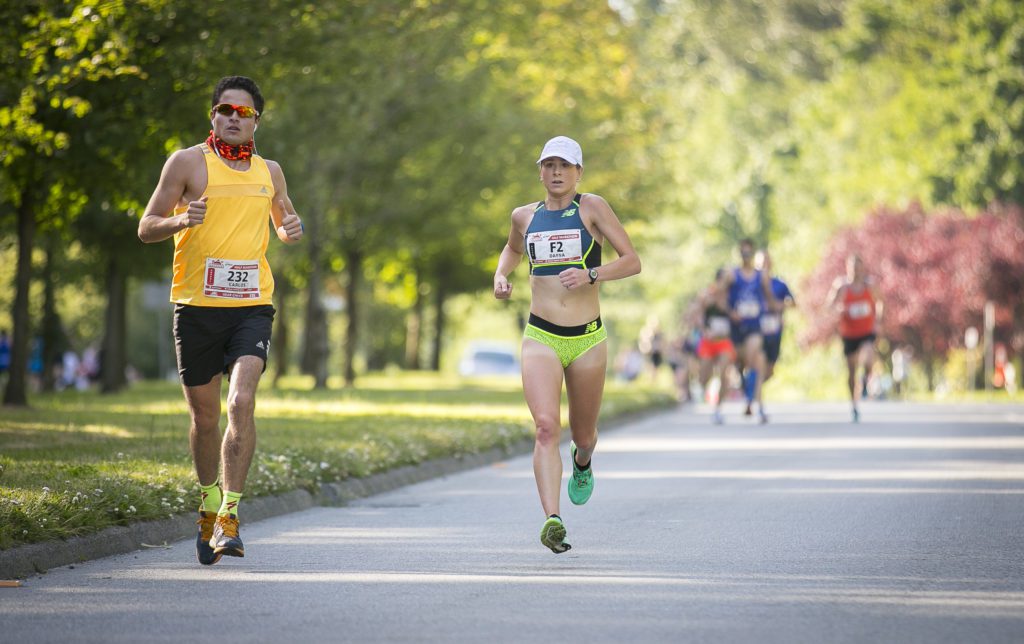 In half-marathon results, Dayna Pidhoresky took the win in 1:13:07. Pidhoresky is having a strong 2019 season on the roads, finishing second at Around the Bay in March. Second and third place went to Canadians Danielle Thiel and Robyn Mildren in 1:15:19 and 1:15:39.

In the men’s half-marathon results, Haron Kiptoo Sirma was the winner in 1:03:47, second place went to Jonathan Kipchirchir Chesoo was second in 1:04:47 and third place went to Caleb De Jong in 1:05:08.