The Sole Sisters 5K, an untimed, women-only race with the claim to fame of being the largest women-only 5K in Canada, is unwilling to rest on its laurels, with more events and unique race opportunities planned for 2016, including optional timing and the introduction of quarter and half marathon events.

Canadian Running caught up with race director Stacy Chesnutt to tell us about what female runners can look forward to from the upcoming Sole Sisters events. 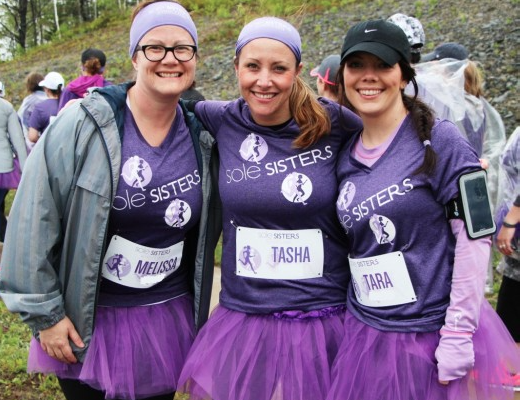 Canadian Running: Why a quarter marathon?

Stacy Chesnutt: A lot of people get so caught up in times and comparing one race to another that I really just want to create a unique space for women to step away from all of that. A quarter marathon can’t be compared to a 10K time. I think this distance also gives women the opportunity to keep working up gradually to longer distances. We might get some seasoned runners out too, looking for a novelty distance so they can snag a PB!

CR: Can you talk a bit about the decision to let participants decide whether or not they want their race timed or not?

SC: I’m of two minds. I come from a competitive background and I’ve always loved racing and the times that go with it. But, I also have lots of friends who would rip the timing chips off of their bibs during races because they really just hated the thought of being judged based on their times. Sole Sisters is definitely a celebration of doing the race, not doing it in a specific time, so I was really pondering how to create an atmosphere for the distance races that was still as non-judgemental as the untimed 5K.

The plan right now is to poll the participants about a week before the race about whether or not they want to be timed or not. That way, people that have maybe experienced some bumps in training, but still want to race, can opt to go untimed, or anyone who just doesn’t want to focus on numbers can go untimed. The best part about it is that on the results page, all the untimed finishers are going to be listed alphabetically before the timed racers, so you have to scroll through all of them to get to a time. That’s how we’re going to send the message that you’re not more special if you run a specific time, but rather that everyone deserves respect for finishing.

SC: There really is just a special type of energy at Sole Sisters. You get this incredible group of women together, the Maritimes as an environment has its own aura and everything about the race is focused on celebrating female athleticism, it is just makes for a really fantastic experience.

CR: We know that 2016 is just set to be the inaugural running of the Sole Sisters half, but looking forward a few years, do you see Sole Sisters offering a full marathon?

SC: My honest answer is that I don’t know at the moment, but that I would never say never. I know that Nike used to offer a full women’s only marathon in San Francisco, but recently reduced the race distance to a half, so I think there is currently a void in that specific area. But, that being said, Sole Sisters is a racing atmosphere for the woman with a lot on the go and I’m very aware of the fact that training for a half is a big commitment with the career and/or childcare commitments that most women today face and that a full marathon is a huge step up from that. So, I guess my answer is that we’ll just have to see how things go.

CR: You’re introducing a girls-only 3K alongside the women’s only 5K in 2016, what are you hoping to see at that race?

SC: I’d love to be able to claim the largest girls-only race in Canada! Through my experience with Girls Gone Gazelle, which is a free, not-for-profit all-girls running club based in Dartmouth, I know first-hand what a difference running can make in terms of the physical and mental well-being of young girls and that it builds lasting self-confidence and healthy habits. The Girls Gone Gazelle club is able to be offered free of charge to young women because of the financial support from the Sole Sisters race, so it will be great to get young women involved in their own racing event.