Whether you are running your first or 50th race, there is no better feeling than crossing the finish line. We appreciate all finish lines in life no matter your goals, but we take a look at some of our favourite finish lines in races across the running world.

It would be hard to leave the finish line of the prestigious Boston Marathon off the list. Right on Hereford, left on Bolyston and you can see the finish line, with 500m to go. It’s a memory Boston marathoners remember forever. To hear fans, family members and Bostonians screaming at you as you run toward the line certainly gives you a final push to the finish.

This UTMB finish line sits right in the heart of Chamonix, surrounded by picturesque views of the French Alps. Ultrarunners descend from the mountain into the village after 171 km of racing, and hear the roar of the crowd as they run through narrow cobblestone streets toward the finish.

The Olympic marathons always take place on the final two days of athletic events at the Games. Although fans were not allowed in the stadium in Tokyo, there were people lining the marathon course in Sapporo, which was one of the advantages of it being moved to that city. The raw emotion of athletes celebrating as they complete the Olympic marathon is a moment like no other.

Canada’s Around the Bay 30 km road race has a unique finish line, in which runners finish go through the lower level of a hockey arena to finish at centre ice of Hamilton’s FirstOntario Centre. Friends and families sit inside the arena to watch runners cross the line. Spectators will also sit inside to avoid the freezing temperatures of the March race.

RELATED: Strava reveals which cities are home to the fastest runners and most marathoners

Similar to Canada’s Around the Bay race, the Melbourne Marathon finishes inside one of the world’s top 10 largest stadiums: the Melbourne Cricket Ground (MCG). The MCG has a seating capacity of 100,000 people and is home to the AFL Grand Final and Australia’s cricket team. Runners enter the MCG after completing 41 kilometres around the streets of Melbourne, to finish the marathon at midfield.

The Great Wall of China Marathon starts and finishes inside the village of Huanyaguang’s Yin & Yang Square. Despite the steep climbs on the iconic Great Wall of China, runners are rewarded by the breathtaking views along the course. In the last two kilometres, as you reach the village from the wall, spectators will be cheering as they have a traditional festival for runners. 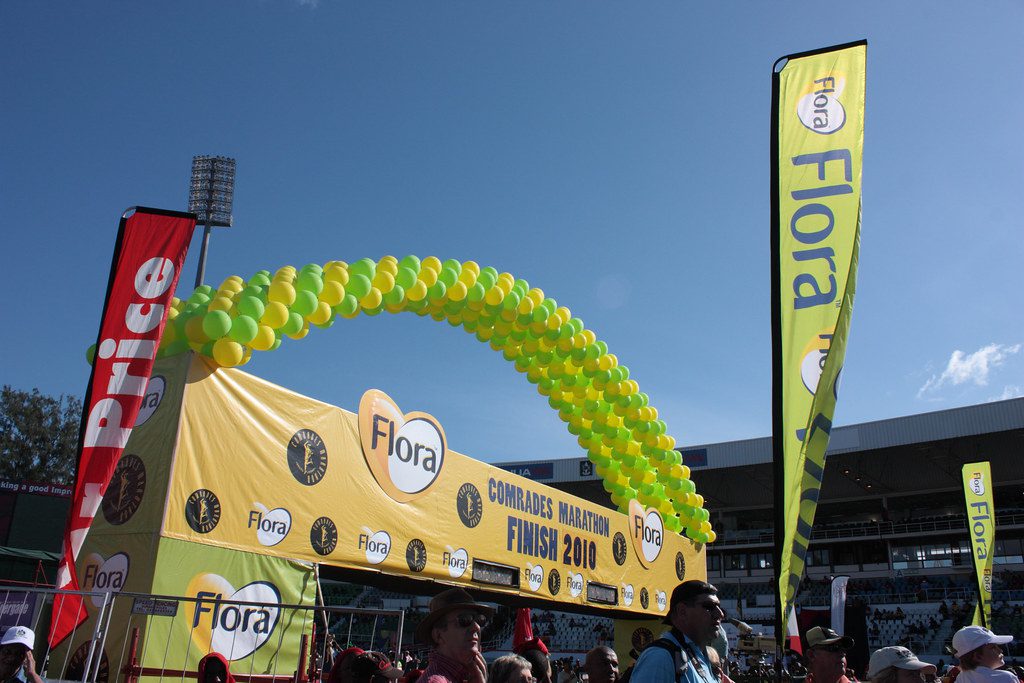 The Comrades Marathon is a point-to-point 90 km ultramarathon in South Africa, starting at City Hall in Pietermaritzburg and finishing at the Sahara Kingsmead Cricket Stadium in Durban. Race spectators wait at the finish in Durban in front of a big screen, waiting for entrants to cross the line. The race has a challenging time limit, as runners must complete the distance in less than 12 hours.