“Life is an ultra, not a sprint,” they say. Yet on April 13, Katie Mills proved otherwise at the Diez Vista 50K in Port Moody, B.C. Running strong in second place all day, the North Vancouver trail and ultrarunner took the win by 19 seconds in the final stretch. Mills sprinted by Victoria’s Jennie Sprigings as though they were at an indoor track meet. Although Sprigings was consistently two minutes ahead for the majority of the race, Mills won in 5:09:08. Sprigings placed second in 5:09:27, and Olivia Vihant placed third in 5:25:42.

RELATED: How to win Chuckanut 50K in six steps

With a 23-year history, and now directed by Coast Mountain Trail Series (Geoff Langford and Gary Robbins), the race gains over 1,800 metres in elevation while showcasing what the rugged Pacific Northwest trails are all about. Mills, a regular in the region’s trail running scene, had never met Sprigings and was pleasantly surprised by her speed, strength, and relentless grit throughout the day. Sprigings passed Mills in the first 3K. “I saw her jogging all the uphills at the start. She was really going for it. I thought, ‘Okay, this girl is really fast on the uphills and the flats. At one point we were running sub four minute kilometres, and I knew that wasn’t sustainable. She was amazing. I just watched her run off into the distance.” Explains Mills.

Sprigings learned early on that Mills has exceptional descending skills and told her kindly, “I’ll see you on the technical downhill again.” But Mills realized they had already completed that section, and felt a bit worried. Mills saw Sprigings at aid station three (22K) changing clothes. Mills left promptly without taking any supplies. Meanwhile, Mills was “sweating profusely in the cold and pouring rain.”

It wasn’t until Mills met Paul Slaymaker, she decided to put her head down and chase harder. The previous race director for Diez Vista knew the course inside and out, and was guiding Mills for a portion of the race like a live RunGo App. “Paul was so nice and telling me turn by turn of the course. He had all the inside scoop of when to push and when to hold back. He lives by aid station five, and his whole family was there. We had so much fun running together.”

“You’re going to let her take it?” Asked Slaymaker to Mills after halfway. Slaymaker suggested Mills start pushing after Powerline Climb around 39K. On the descent, Mills was having so much fun high five-ing her trail running friends from the Salomon Trail Lab she leads every Saturday. Mills got the boost she needed.

RELATED: What to pack for a 50K trail race

Mills could see Sprigings ahead of her on the final climb. There was 4K left, and she would need to run half a minute per kilometre faster than Sprigings to the finish. Mills realized “This is it. I was right on her tail, doing some weird crawl up the final stairs because my legs weren’t working properly. I had some crazy sprint finish, which I wouldn’t recommend at the end of a 50K. It was horrendous. Eyes down, giving it all I had. Felt like I was going Olympic speeds.” 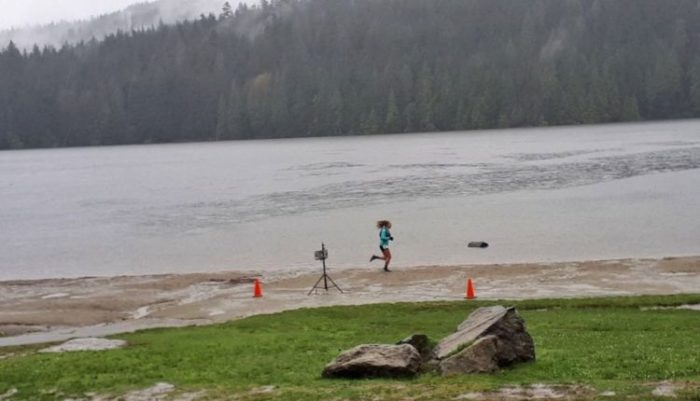 The 19 second gap between first and second place women was a bit shocking, even for race director Robbins who exclaimed “Oh my God!” seeing the women finish so close. The men’s races were a bit more mainstream in terms of finishing times. Mike Sidic won the race overall in a time of 4:13:38, Glenn Jasechko second in 4:34:47, and Guy Polden third in 4:37:57.

Mills wasn’t the only ultrarunner sprinting for the win this weekend. American Anna Mae Flynn of Colorado, sprinted to the win past YiOu Wang in the final 800 metres of the Lake Sonoma 50 miler, taking another Golden Ticket for the 2019 Western States 100.