Jacky Hunt-Broersma is a world record-holder, marathon runner and seven-time ultramarathon finisher. Her achievements are remarkable not only because she didn’t start running until after 40, but because she ran every one of those races with only one leg. This weekend she’ll be tackling her biggest challenge yet: the Moab 240, a 240-mile race through the rugged terrain of Utah. 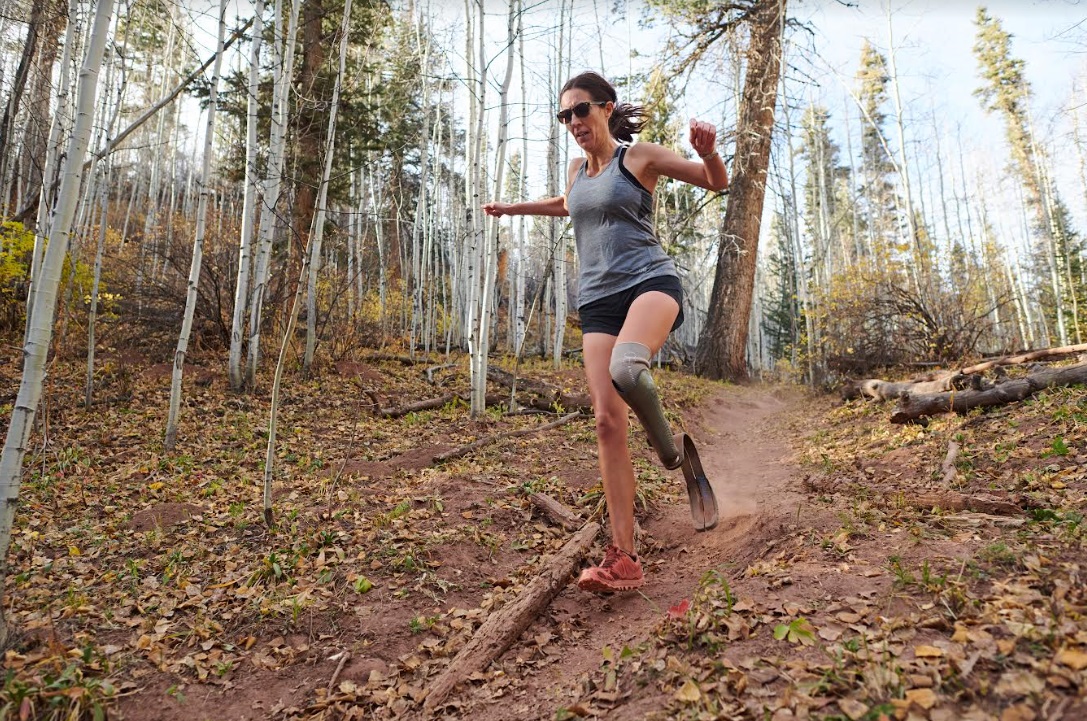 For most of her life, Broersma was not a runner. “I was in the camp that thought runners were kind of crazy,” she says. Her husband is one of those crazy runners, however, so she’d go to his races and watch, wondering why all these people enjoyed the sport so much. It wasn’t until she lost her leg to cancer (Ewing sarcoma) in 2002 that she began to take an interest in it, mostly out of stubbornness, after being told by many sources that amputees don’t run, and she should try a different activity.

She ran her first 5K in 2016 and, as she says, everything happened very quickly from there. Before long, she was running half-marathons and marathons, proving that one leg can be just as good as two. After a while, she began to get bored with road running, so she decided to give the trails a try. The only problem was that she didn’t know if trail running on a blade was even possible. “I did my research, and of course everyone was saying no, amputees don’t run trails!” says Broersma.

Her stubbornness kicked in yet again, and despite the fact that blades aren’t designed for the uneven terrain found on most trails, she decided to give it a shot. One of her first-ever trail races was a 40-miler, and Broersma never looked back. Since then, she has run seven ultras, become the first amputee to take on the TransRockies six-day Stage race in Colorado and set a new world record for the first amputee to run 100 miles on a treadmill, which she did in under 24 hours.

Of course, running on a trail with a blade isn’t without its challenges, and there is a learning curve when it comes to running (or even walking) with a prosthetic. “The hardest thing is that your brain doesn’t recognize the prosthetic as part of your body,” she says, “so you have to teach your brain to trust this foreign object on your leg.”

She likens it to walking with your eyes closed, where you don’t know exactly where your foot is in space, so you just have to take a step and trust that it will land in the right spot. Throw in the extra challenge of steep hills, rocks, roots and uneven footing, and a lot can go wrong. This is why Broersma always carries duct tape with her in case her blade breaks mid-race. “I’ve had the tread come off too, and of course you’re more prone to blisters because of movement and swelling in the prosthetic,” she says. “Over the years I’ve learned what works and doesn’t work, and I’m still learning.”

Broersma will be running the Moab 240 this weekend, 140 miles longer than any race she’s done before. She’s trained hard and is ready to tackle the challenge, and says that her motivation comes from her desire to not be defined by her appearance. “There’s a drive in me, because I’m not disabled, and I don’t want to be labeled as someone with a disability,” she says. “I want to show the world what I can do.”

The race begins on Oct. 8 in Moab, Utah, and all runners have to complete the course by 10 p.m. on Oct. 12, giving her 112 hours to make it back to the finish. There is some rain in the forecast, which will add an extra challenge for someone running with a blade, but Broersma is ready and excited to have the adventure of a lifetime.

“My motto is to live life to the fullest and give it your all,” she says. “When I got cancer, it was so unexpected and suddenly things changed, so I just try to push my limits and do everything I can because tomorrow’s never guaranteed.”

Update: After having a difficult time with her blade on the wet rocks, Broersma did not make it to the aid station within the time cut-off and was forced to end her race early.