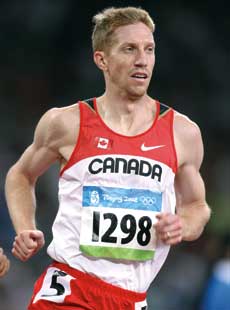 Canadian 1,500m and mile record-holder Kevin Sullivan will be back in Ann Arbor, Mich., this fall coaching the cross-country team for his alma mater, the University of Michigan Wolverines.

Sullivan is one of the school’s most decorated track and field athletes ever. He won four National Collegiate Athletic Association titles and was as a 14-time all-american during his time on the team in Michigan during the late 1990s.

“It is an honour and privilege to be coming back to the University of Michigan as the head men’s cross coach and assistant track coach,” said Sullivan in a press release “As a former Wolverine student-athlete, I truly understand the pride and passion one has to compete with the block M on their chest and I intend to bring the same pride and passion to my coaching.”

The Brantford, Ont., born runner is a three-time Olympian and was one of the best 1,500m runners in the world during the early 2000s. He finished fifth at the 2000 Olympics over the distance.

Since his retirement from competition, Sullivan has stayed involved in the sport, coaching at various NCAA programs and opening Capital City Runners, a specialty running store in Tallahassee, Fla., where his wife, Karen Harvey was a coach at Florida State University.