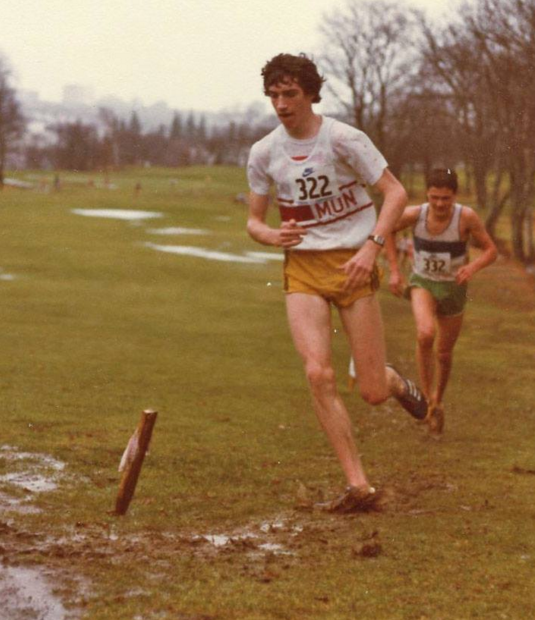 Today, Kingston, Ont. hosts the 2015 national cross-country championships. On the course today in Kingston is a deep field of athletes and this year’s event is the largest one so far with about 900 lining up to race.

The national cross-country championships is the marker of the end of cross-country season in Canada. Before it was hosted in Kingston, Vancouver and Guelph each ran the event for four consecutive years.

Like all championship events, this cross-country grand finale draws incredibly talented distance runners from the Canadian running scene whose performances will be remembered even as the years go on.

Today, we’re revisiting the 1980 running of the event. Hosted by Halifax 35 years ago, the meet saw Paul McCloy (pictured left) lead Carey Nelson to the finish of the junior race. The men finished first and second respectively. Cambridge resident George Aitkin snapped the shot and shared it with his vast collection of photos from the Canadian running scene on his Facebook page George Aitkin’s photos.

RELATED: 1984 OUA cross-country: Where are they now?

The winner of the senior men’s race that year was Vernon Iwancin who finished the course running 38:26.

As for McCloy, he went on to make quite the name for himself in the cross-country scene. He won the national championships seven times (according to LetsRun.com), represented Canada in the 10,000m in the Olympics in Seoul, Korea eight years after this photo was taken and raced every single IAAF World Cross-Country Championships from 1983 to 1992 with the exception of 1989.

Months after this 1980 moment in Halifax, McCloy went to Madrid to race the junior race in the IAAF World Cross-Country Championships. That happened on March 28, 1981. He placed 16th.

McCloy was a well-known runner through the 1980’s and 1990’s. He was known not only for his speed but also for his wild running form. Spectators could point him out from quite a distance because of the way he flailed his limbs. For that, he was nicknamed “Two-Lanes McCloy,” the joke being that when racing him on the track, a runner would have to move out two lanes in order to pass him. Many also teasingly called him “Nuts and Bolts” poking fun by saying he was hinged differently which caused his recognizable running form.