Dennis Fairall has celebrated a remarkable career as one of the best-ever coaches in Canada’s university scene. After building the team at the University of Windsor into the champions they are known as today, he has recently stepped down from his role. In an Olympic year though, he is focused on coaching one of Canada’s most promising athletes as she heads towards Rio. We talked to a few of Fairall’s athletes who reflect fondly on their track days with the coach. 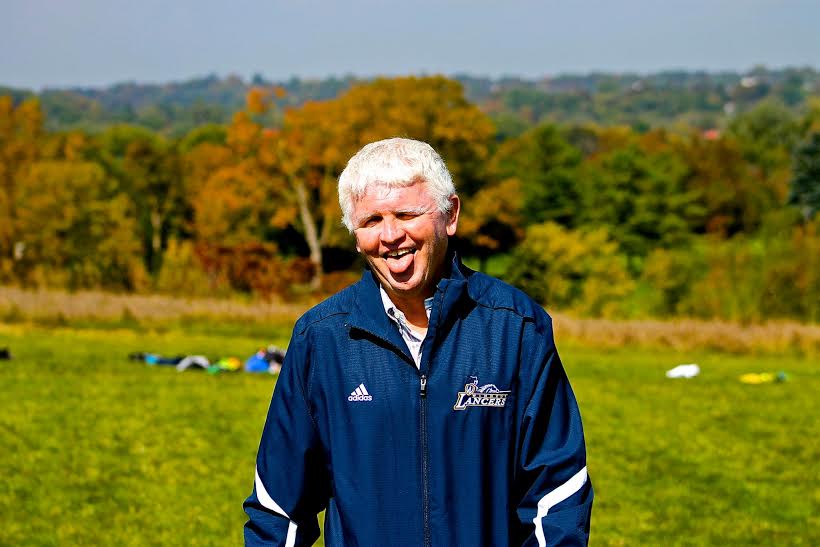 Walking into the St. Dennis Centre at the University of Windsor, you’re almost always sure to see a man with a famous full white head of hair coaching an athlete around the 200m indoor oval. These days, that’s most likely to be Olympian Melissa Bishop, but in previous years, it could have been any runner from the Windsor Lancers. That man is Dennis Fairall, the University of Windsor coach known by many as patient, determined and inspiring.

Fairall could take a sport full of individuals and create a team. Anyone who’s been coached by Fairall knows his motto: “One team, one goal.” Fairall is known by most in the Canada’s track community and by all who ever competed in the Canadian Interuniversity Sport (CIS) track and field since 1985. The long-time coach of the track and cross-country teams recently stepped down as he’s struggling with his health. In his 30-year career, Fairall has coached over 1,800 athletes, worked his way to 46 OUA (Ontario) titles, 25 CIS championship titles and received 65 coach of the year awards.

“To see him on the warm up track after the race, it was a really great moment for us. And then to cap it off with a silver medal was really cool for both of us.”

While he has had to step back from full-time coaching, he’s still focusing on coaching one of Canada’s top female runners. Melissa Bishop has been under his guidance for over nine years. The two have already had huge recent success with Bishop capturing a silver medal at the IAAF world championships in Beijing this past summer. The track star is now the Canadian record holder for the 800m for both outdoor and indoor performances. Currently, the two are working hard towards the Rio Olympic Games this summer, where, for the first time in a generation, Canada has a serious contender at a middle distance event.

Fairall started off as a sprinter. He was a member of the 1975 record-setting 4 x 200m relay team at the University of Western Ontario. From there, Fairall went on to coach in his hometown of Tillsonburg, Ont. where he founded the Tillsonburg Legion Track and Field Club. Soon after, he was hired to be the Windsor school’s head coach in 1985. This is where he would begin his professional coaching career, building up the Windsor Lancers track and cross-country to become the championship teams they are known as today.

Fairall has a coaching style not often seen in an individual sport like running. From early on, he instilled a different mentality, insisting to his athletes that the team is bigger than the individual and that therefore, it is the team that drives athletes to be their best. That’s a theme that’s apparent every time the Lancers are spotted at an event. Distance runners bang the boards at shotput competitions, throwers start the slow clap on a jumping runway and an entire team chants as the final runner on the relay team kicks down the home stretch. This is the culture that Fairall created.

“I was still pretty fired up and angry at the end of the race and Fairall comes running by with that big, boyish shit-eating grin of his and says, ‘See? I yelled at you for a reason.’ I could have killed him.”

But he also mastered a crucial technique that helped him get the most out of a full team of individual athletes. Fairall customized training specifically for each athlete’s needs. For a team of roughly 40 athletes, this was a difficult task, and Fairall clearly has an incredible knack for figuring out which coaching methods work best for each person. He knows when to push, when to hold off, when to help out. 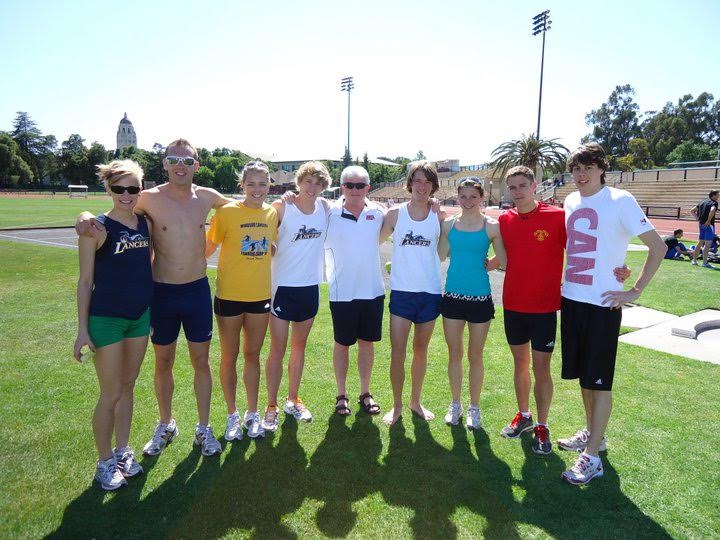 On the international stage, Fairall’s career is impressive. He’s been the coach of Team Canada’s World University Games four times. Twice he led the Canadian Maccabiah Games team; he was behind the action when Canada’s 2005 Pan American Junior team wracked up the highest-ever medal total for the event.

“When I joined the team, his hair was brown with a white patch. When I finished five years later, it was all white. Everyone blamed me and Mark Kiteley for that. Including Dennis.”

Fairall is a member of the Windsor/Essex County Sports half of fame, the Tillsonburg wall of fame and the Athletics Ontario hall of fame. And recently, he got one of Canada’s highest awards for coaching: the Queen Elizabeth II Diamond Jubilee Medal as the Coaching Award of Excellence.

We asked some of Fairall’s former athletes about their experiences with him.

“Dennis began unpacking his clothes to get dressed, stopped and then exclaimed, ‘Jannneeett! You didn’t pack underwear. Aww c’mon!’ So our drive to the meet included a pitstop at TJ Maxx.”

What do you think is most unique about Dennis’ coaching style?

 Of all the coaches I’ve ever had, he’s the only one who could perfectly adapt his style to the personality of the athlete. There’s basically three types of athletes and tactics you use: the whippers (i.e. RUN FASTER JABLONSKI!), the strokers (i.e. You’re doing great Little Johnny!) and just guys you leave alone. He totally understood that and could squeeze a good performance out of an athlete better than anyone else I had the pleasure of competing for.

 The most unique thing about Dennis’ coaching is that its not a “one-fits-all” program. Through university when we worked in bigger groups, Dennis always had multiple workouts for our 800m group. He learns quickly about what works and what doesn’t for athletes.

 Dennis always promoted the team-first mentality and used that to motivate his athletes. If we worked hard for each other and did our own part each day at practice and at meets, then we would all be successful. It was never about one individual performance but about how each athlete contributed to the overall team success.

 His ability to adapt workouts to each individual athlete. Sometimes we have to change workouts part way through based on feel and Dennis is able to do that on the spot. He has a way of encouraging and pushing you to go faster during intervals. It helps to have some comic relief during a tough workout and Dennis always provided that for us.

What is your best memory with Dennis Fairall?

“Prior to that race, we had chatted and he said ‘Bish, you’re ready for a good one.'”

 During practice, when we would have a longer rest, he would joke that he will leave for his office or a coffee and come back… rest was only like two minutes.

 He always whistles at us to get our attention so now any time I hear a whistle, I turn and look, half expecting to see Dennis.

 We knew that Janet (his wife) took care of a lot around the Fairall household but it became evident just how much that was during one of our trips. Dennis began unpacking his clothes to get dressed after his morning shower, stopped and then exclaimed, ”Jannneeett! You didn’t pack underwear. Aww c’mon!” So our drive to the meet included a pitstop at TJ Maxx.

 The 1999 OUA Championships. The last race of the first day was the 4 x 800m. We had a really good team and ended up winning nationals, but at OUAs, three of the four guys shit the bed. I was the only guy who actually raced well. The other three guys were quieter. Fairall was super angry but couldn’t yell at them. So he yells at me, in front of over 1,000 spectators. Man, I was mad. I came to the track the next day and I was still mad. I was in the most talented group of 1,500m runners at the OUA level in years. We finished and beat them all. And, of course, everyone is going nuts. I was still pretty fired up and angry at the end of the race and Fairall comes running by with that big, boyish shit-eating grin of his and says “See? I yelled at you for a reason yesterday Mack Truck, I knew you’d get fired up.” I could have killed him. I’d been on the team for five years, I knew exactly what he was doing and it still worked. That’s how good he was.

 I’m not going to call it a memory because we still have a lot of work to do. But the best story, was this past year in Beijing at the World Championships, after the semi-final where I had broken the Canadian record and qualified for the finals. Dennis isn’t a hugger but he gave me the biggest hug. He was so happy. Prior to that race, we had chatted and he said “Bish, you’re ready for a good one.” He told me that I would likely need to run a PB to get through to the final. So when I finally got to see him on the warmup track after the race, it was a really great moment for us. And then to cap it off with a silver medal was really cool for both of us.

Do you know what Dennis’ natural hair colour is?

 Any pictures I’ve seen of him from before his hair turned into the silver fox were in black and white. I would have to guess brown, though.

 When I joined the team, his hair was brown with a white patch. When I finished five years later, it was all white. Everyone blamed me and Mark Kiteley for that. Including Dennis.

“Dennis, you’re not done coaching yet–we still have some goals to tackle this summer.”

 Thanks Dennis for all your hard work and encouragement. If it wasn’t for you, I wouldn’t have enjoyed track as much as I did. Going on trips where we would train hard, race hard and laugh hard are memories that I will never forget. You have pushed me to achieve my personal best times and inspired me to keep going for more. You are more than just a coach to me–we have become closer over the years and I can’t wait for the adventures that are to come.

 Thank you! I really owe so much to Dennis and the Lancers program. I can honestly say that my five years in Windsor were the best of my life and, despite the cliche, they have shaped who I am today. I met so many people who I will undoubtedly be lifelong friends with. I am now a phys. ed. teacher in Ottawa and the way I teach and coach is largely inspired by Dennis.

 Dennis, I’m so grateful and honoured to be an athlete under your program and to be working with you. However, you’re not done coaching yet–we still have some goals to tackle this summer.