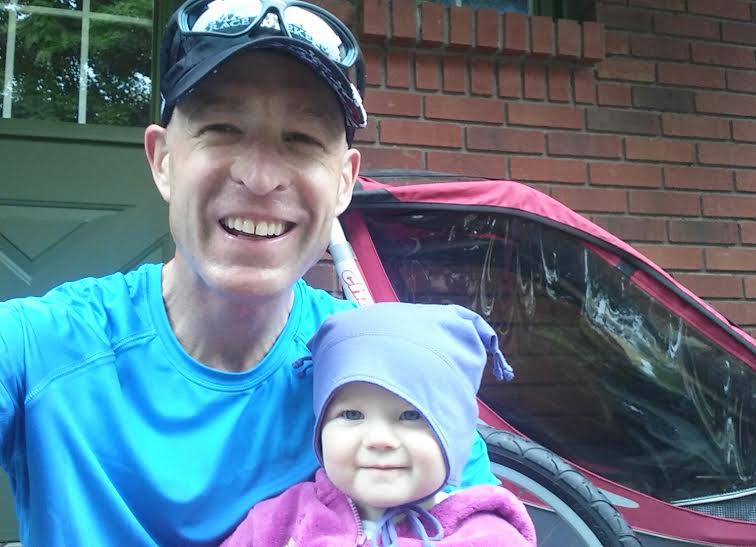 I’ve been a runner for almost 30 years now. While I wouldn’t say that I define myself by running, it is my passion and it does take up a lot of my life: running books line my shelves, the number of running shoes outnumber all the others.

While running is a big part of my life, last May, my life completely changed when a little baby girl was placed in my arms. I became a dad and it changed elements of my like– including my running– forever.

Before I had my daughter, I used to run when I wanted and race whenever it suited me. Now this little pamper-clad family member calls the shots. It seems crazy now, but in the early days, I would squeeze a run in between feedings, naps and cleaning. I was forced to work to balance my will to run with the need to be a good dad, husband and stay on top of other responsibilities.

So I bought a running stroller.

Last year, Father’s Day arrived soon after our baby was born but because I was such a new parent, I didn’t really appreciate it. I just hadn’t spent enough time in the role. I felt that I hadn’t earned the recognition yet. Fatherhood is not about just bringing another person into the world: it encompasses everything that’s required to nurture and raise that little person into adulthood. It’s a role, a job and a privilege.

A father is there for his child through the crying that lasts into the early morning hours and during the full-fledged tantrums as well as the fun moments.

Moms often do a lot of the work. I often feel like I’m the part-time parent. I’m not sure that I deserve a dedicated day but I think it’s still a great opportunity to celebrate the father’s role. When kids are brought into the family, there’s a lot of work that goes into raising them and whether that family has one father or two, it’s important to recognize all that dads do.

Becoming a father had become such a big part of my life. I now combine these two passions into everyday life. You’ll see me out there running still– just, I’ll probably be pushing a stroller.

You can also catch Noel on Twitter @NoelPaine or on his personal blog.