Frank is a 43-year-old married father of two living in Quebec. Born in Laverlochère, Que., Frank now lives across the bridge from Ottawa and works for the federal government. Frank is a clean cut, lean-looking man with just the hint of silver hair at the temples and a ready smile. Frank has Multiple Sclerosis. 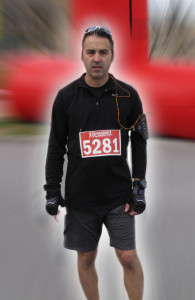 Frank was diagnosed with MS in August 2013. Frank’s initial symptoms of numbness on his left side and a temporary loss of vision are now mainly under control with medication. Wanting to do more than just take medication, Frank bought running shoes after he found out that exercise can help ease severity and symptoms. In October 2013, Frank took up running to help raise awareness and funds for MS research and to also help fight the disease.

“When I run, the energy it gives me makes me feel much better.”

Frank says his running will always be tied to MS. He says he enjoys it now and how it makes him feel but any race will always be more than just a run for him.

“If I have a race number on, I will be running against the clock and myself but also with team MS.”

This past April, Frank toed the line to try and better his 10K personal best at the local MS Walk/Run in Ottawa. After a long, cold winter of trying to get runs in and balancing running and a family life, Frank ran a PB and a time of 46:56.

I asked Frank a few questions about his running.

How does having MS change how you run?

I started running with MS, therefore my only experience running is with the disease. I see myself as a runner with MS. I want to run and achieve new goals. I imagine myself running faster than the disease and leaving it behind.

What advice do you have for others who have MS and want to run?

Check with your doctor for what is right for your type of MS, but I think exercise can help no matter what. Every step you take, each accomplishment you achieve, is a new step forward in the fight against this disease.

Frank can be found running in the National Capital Region, often in the morning or evening when the air is cooler and makes running easier for him.

Do you have a running story to tell?

runningwriter@hotmail.com
You can also catch me on Twitter @NoelPaine or on my personal blog.