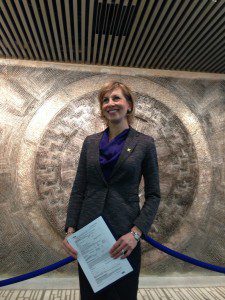 Usually on Monday mornings my four-legged friend, Oscar, and I head out for our 5K run through the ravine. This Monday, I left Oscar at home and started off on a different kind of run. I officially registered to run for election as Toronto’s 65th mayor. I was asked by a journalist whether this race is like running a marathon, and I agreed it was the equivalent of a long run. Just as the Scotiabank Toronto Waterfront Marathon weaves through neighbourhoods from west to east, I will visit every corner of the city and talk to people about what they want to see. Over the next eight months, I will present my ideas to residents and hear from them how, together, we make Toronto even greater. It was a whirlwind day, which marked the beginning of what will likely be a whirlwind campaign. As I literally ran from television studio to television studio, I was grateful to Oscar that he keeps me in shape.

This morning was less hectic. Oscar and I resumed our morning sojourn. It was  icy but we prevailed. It was nice to be out quietly enjoying Toronto. As the mayoral race gets more intense, the morning runs will become even more important. As the ice melts and winter turns to spring, I will look forward to the 5K, 10K and half-marathon in the fall. No matter what the campaign brings, I will keep on running.