The Nike Alphafly has become one of the most iconic and controversial shoes in distance running. Its long-anticipated arrival came just days after World Athletics launched new shoe rules that made anything with a stack height of over 40 mm illegal on the roads, and the Alphafly came in just under the wire at exactly 40 mm. The shoe has taken off with runners using it to run everything from personal bests on virtual courses to world records. However, the shoe is expensive and delicate (it’s designed to be worn only on race day), making it out of reach for some runners. Enter Nike’s newest shoe: the Air Zoom Tempo Next%, aka the people’s Alphafly. 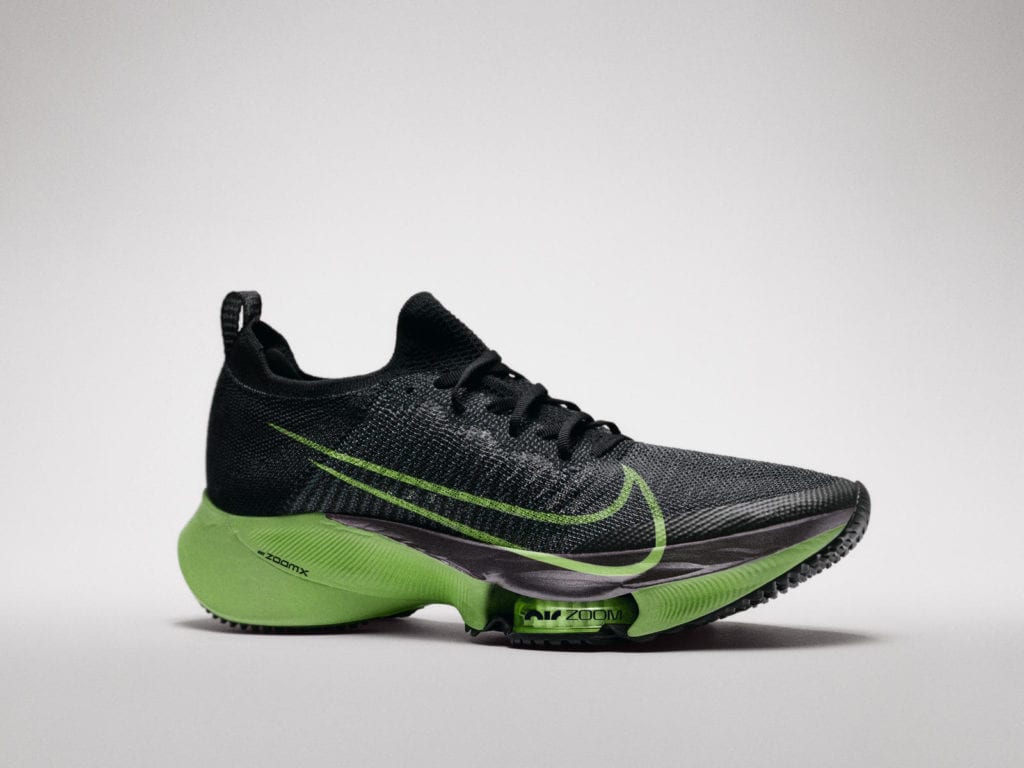 The Tempo Next% is designed to be the everyday version of the Alphafly. It’s more durable and less aggressive than its racing-oriented older sibling, but it still has the feel of the Alphafly that keeps runners coming back for more. At C$260 it’s also more affordable and could be used as a race-day shoe as well, if the Alphafly or NEXT% isn’t in the budget – but it’s designed to be the everyday training companion. The shoe should last just as long as any Nike trainer, like the Pegasus would, so runners can expect between 500 and 600K from this shoe.

The upper is made of seamless Atomknit, which is tighter around the mid-foot and a little more malleable where runners lace up. The biggest innovation in the upper is what Nike is calling the FlyEase lacing system. Designed with para-athletes in mind but available for everyone, this lacing system tightens and loosens shoes by pulling a tab, so only one hand is required, making it easier to put on and take off for every kind of runner.

The heel counter has also been made to bend to the runner’s foot, allowing the shoe to go on like a slide sandal would. Remember when your parents told you to stop standing on the backs of your shoes because it would ruin them? Nike has just released a product that makes that statement inaccurate. In fact, the company is encouraging it.

RELATED: Everything we know about Nike’s newly-released plated spikes

The midsole of the Tempo needed to be more durable and forgiving than the Alphafly in order for this to truly be an everyday shoe, so Nike changed the midsole composition. The shoe has ZoomX foam running through the forefoot and midfoot, but at the heel has added some React foam for additional cushioning. This will keep the running feeling fresh and the shoe performing well for longer. On top of the React foam, Nike has softened the plate. The rigid carbon plate of the Alphafly has been traded for a plastic one, which allows the foot to move more freely, while providing the foams the stability they need to perform. The role of the plate here is to facilitate a smooth transition, as opposed to propelling the runner forward.

The outsole is also quite different than that of the Alphafly, with significantly more rubber, which adds weight but also improves traction and durability. Karissa Schweizer, the American record-holder for the indoor 3,000m who runs with the Bowerman Track Club, says the Tempo is great for Portland, where she lives: “I really like this shoe for long runs and easy runs on the roads, because it has better traction than NEXT%, which can get a little slick with all of the rain.”