Chanel Fall and Rob Larkin have gone on many runs together during their six year relationship but one in particular is sure to top them all. 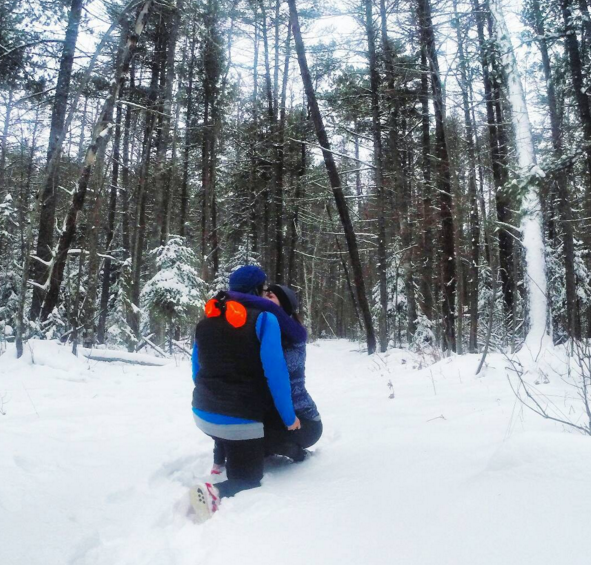 Having grown up in northern Ontario’s Sault Ste Marie, Chanel Fall has become quite adjusted to living the active sort of lifestyle. When back in her hometown, if the 23-year-old is not running, she’s cross-country skiing or snowshoeing through the bush. She’s got the ideal location for someone with these sorts of interests: the Fall home is plonked smack dab in the middle of the forest with fluffy fresh snow, forest trails and trees packed densely together.

Though Fall currently lives in Toronto while she works to get her career started, she has plans to come back and live in Sault Ste Marie permanently. Those who know her wouldn’t question this– she makes the trek up north from the big city frequently to spend time with her family and her now-fiancé, Rob Larkin, 23. The two met in high school and have been together for almost six years now and when Fall started running four years ago, Larkin accompanied her on many of her runs (he’s been running since high school) including training runs of up to 35K.

It’s not out of the norm for a morning with Larkin to start off with a five or six-kilometre run along the trails just outside the door of her house. On the last day of 2015, that’s what they did. Fall had plans to get up at 8:00 a.m. to start the day with a quick run. Larkin wanted to come too to get in a run before heading to his work as a paramedic.

“He said ‘Want to bring the Go Pro?’ and I said ‘Of course,'” says Fall. “That’s not unusual,” she adds saying that the two often bring the camera to capture moments from the run.

They set out on a six-kilometre out-and-back route– one that they do often. It was four kilometres in when they stopped. Larkin took the Go Pro and set it up on a log by the trail to take some photos. He said he wanted a shots of Fall running and told her to run ahead of him on the trail, stop and then come back. When she turned around to come back, he stepped in front of the camera. Fall had a feeling something was going to happen.

“I stopped because he was smiling at me My heart was beating super fast,” she says. Larkin dropped to one knee in

the snow and pulled out a ring which he had been holding on his pinky finger inside his glove the whole time.

“I can’t even remember him asking, I just remember that the words were said. I said yes and I let him put the ring on my finger and I got down and hugged him.”

Of course, the newly engaged couple also has Go Pro photos of the moment.

Afterwards, they got up and finished the final two kilometres. “He still had to get back, shower and go to work,” says Fall.

When they got in the door, they broke the news to Fall’s parents who were excited, her mom teasingly adding “Well it’s about time.”

“It was so perfect,” says Fall. “It couldn’t have been more perfect.”

Though the engagment happened so recently, Fall says they will likely have a casual, laid back wedding in 2017 or 2018. They recently closed to deal on a plot of land in Sault Ste Marie. Their focus right now is to work towards building a small home in the woods with plenty of trail runs to look forward to in the future.

RELATED: When Graham met Sally: A story of runners in love