Last Sunday CJ Alberston, a 27-year-old cross-country coach who lives in Fresno, Calif., ran a 2:09:58 marathon on a treadmill. According to LetsRun, Alberston did it on a whim, without intending to break the treadmill world record, which prior to Sunday, stood at 2:17:56. The runner reportedly wanted to do a long, hard effort, but due to poor air quality, decided to run inside. So he stepped on his treadmill, put the speed up to 2:10:00 marathon pace and ran the full distance (plus an extra mile for good measure). 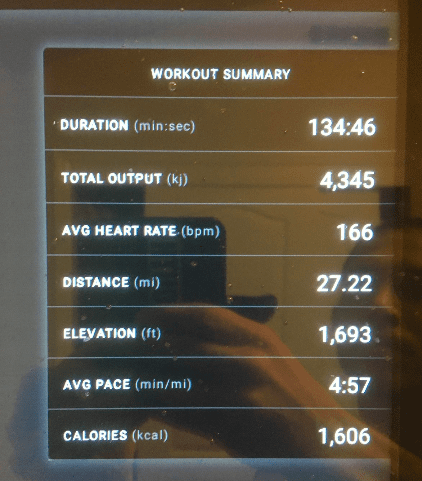 Albertson is no stranger to long slogs. Earlier this year, he broke the 50K world record at a local track, running 2:42:30 to take the record by over a minute. This was billed as an official record attempt and put on by his sponsor, Brooks. In February, Alberston was a sleeper hit at the U.S. Olympic Marathon Trials, where he finished seventh and ran a personal best of 2:11:49 on what was one of the hilliest courses and windiest days in trials history.

Albertson disclosed to LetsRun that this was far from a record attempt, and that he actually didn’t even plan on running a full marathon. As he ran, he felt good, so he kept going. Technically, Sunday was a huge PB for Albertson.

If you’re a treadmill person, then technically running on the indoor conveyor belt should be easier. You’re not facing the elements, it’s much flatter than any marathon course, you’ve got something dictating your pace so you can’t make an error there and finally, in the event of a bathroom emergency, the comfort of your own facilities are moments away.

The only reason the treadmill makes it harder to run well is purely the mental challenge of running hard but staying in the same place. Without a change of scenery, incline, or cheer from a stranger, running your best marathon on a treadmill sounds nearly impossible. But if you’ve got an exemplary amount of focus and drive, Albertson has proved it’s possible.