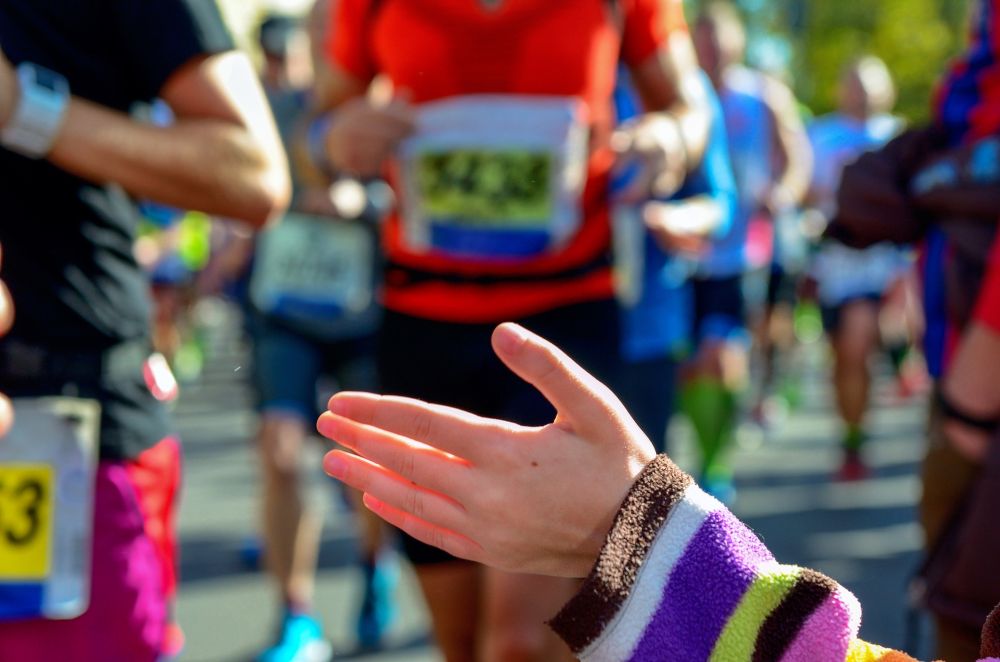 Spectators who have rolled into town for a major marathon know one thing: the crowds and the energy from the sidelines is absolutely incredible. Head to Boston or New York and the whole city comes out to watch this fabulous parade of runners storm through the finish line. Patios are packed, cheers can be heard from blocks away. With the fall marathon season now in full swing it’s not just the big-name marathons that will see runners flocking to start lines. Furthermore, race day is for more than just those pinning on the bibs – it’s an event for the spectators too. If you’re a non-runners who lives in a city where spectating doesn’t always go without saying, what are some ways in which you benefit from coming out to the sidelines?

If your city experiences a lot of congestion, traffic jams and honking, take advantage of race day to experience the city road-rage free. Surely watching thousands of active, determined folk make their way along the course is more inspirational than frustrated and angry morning commuters. It’s not that often that city dwellers get to see what their hometown is like when roads are shut down. Expect a vibe similar to parade day or pedestrian Sundays – if your city does that.

The weird costumes and kooky culture

Just spend a half-hour watching runners pass you by in a race and you’re bound to pick up a few of the absurdities of the running community. We’re talking people dressed as knights or chefs, runners juggling or running backwards and maybe even a wedding.

One of the secrets of race day that many non-runners aren’t aware of is the countless promotions, sales, special discounts or one-of-a-kind menu items that show up for that date only. For example, restaurants may have on an extra delicious special and brunch spots will do anything to win your rumbling stomach. Boston sees marathon-specific brews all over the city and Toronto restaurants have been known to partake in hosting crawls for the running community. Find out what your city has to offer.

RELATED: Top ten tips for being the best spectator ever

Post-race celebrations are worth your while

Those who run 42.2K or a half-marathon know how to have fun afterwards. Many times, cities will host events that draw even those who didn’t sweat a drop. Vancouver’s SeaWheeze Half-Marathon throws quite the party at the sunset festival afterwards for anyone who loves the vibe of a summer music fest and Halifax’s Maritime Race Weekend has its fair share of live music. It’s likely that your city’s best tourist attractions are trying to get in on the action so take advantage.

You’re bound to see tears, laughter and excitement. Finish lines are high-drama locations where runners crawl or roll to the finish, break course records, etc. For many, the emotional stakes on race day are high as the race marks the end of a weight loss battle or long road combating illness. Seeing people the moment after they’ve achieved their biggest goal provides a certain inspirational pang that simply cannot be replicated.

In other sports, if you want to see an Olympian in action, you have to get tickets and a good seat. That’s not the case when watching your favourite distance runners. All you need is to plant your feet on the sidelines and wait for the likes of Lanni Marchant, Krista DuChene, Eric Gillis or Natasha Wodak to glide by. Seeing an athlete of this caliber perform right in front of your eyes is an experience to be had. Oh, and the perk with getting acquainted with these runners: the sport’s easy to follow so even if you didn’t do your research, it’s not like you’ll be lost with what’s going on.

Watching a marathon is one of the few times one gets a chance to spot world class athletes without having to shell out the big bucks. This spectating experience costs zero dollars, you’ll have a window of a few hours to catch the action, and if it’s just a quick walk down the street or bus ride away, there’s really nothing to lose.

You’ll leave motivated for your next fitness endeavor

Running doesn’t have to be your thing for you to appreciate the spectating experience. Likely, watching the race will leave you with a surge of motivation to tackle your next fitness goal be it yoga, working on that core or maybe even finally signing up for that 10K you’ve been curious about.