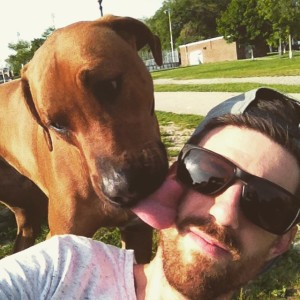 Justin Duncan has had various running partners throughout his career, between running on the cross-country and track teams at the University of Tulsa, training with Athletics Toronto and working at the Toronto-based Runner’s Academy. But, none have been quite like Achilles, his two-and-a-half-year-old Rhodesian ridgeback.

Contrary to what people think, Achilles is named after the Greek warrior from Homer’s Odyssey, rather than the finicky tendon that often nags runners. The two of them spend the majority of their time running in High Park or along the Lakeshore and Humber River trails, which are more dog-friendly than the streets of Toronto. 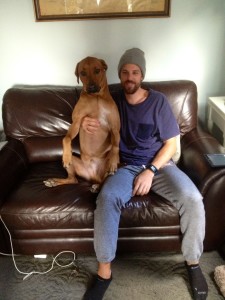 Justin often lets Achilles cool off with a dip in Lake Ontario while they’re out.

“One time, he spotted these swans and started swimming up to them. He got pretty close before the swan spread its wings to make itself look huge 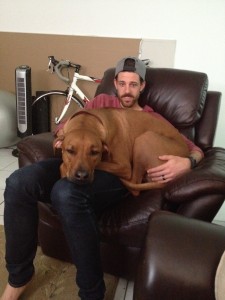 and started snapping at him. He was pretty scared and came barreling back to me on the shore,” Justin says with a laugh.

The longest that Justin has taken Achilles is 10K and he waited until he was over a year before he hit the roads with him. Justin and his wife have another dog, a miniature daschund named R2, but at only seven pounds, she can’t quite keep up with Justin and Achilles.

Justin, who works in strength and conditioning for the Runner’s Academy, is spending the summer training with his eyes on a fast fall 5K.