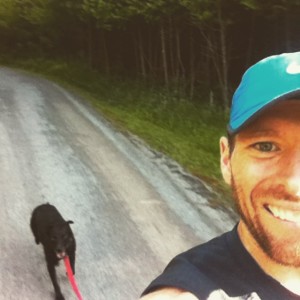 Kyle Desormeaux really wanted a dog to join him on his runs. The journey of finding his running pal, Chopper, is quite the tale.

While on vacation in Utah, the University of Guelph cross-country alumni and his wife decided to do some volunteer work for Best Friends animal society, a leader in the no-kill movement and the society that runs the United States’ largest no-kill companion animal sanctuary. While they were there, they met and fell for a black lab mix who had been a stray in the San Antonio area.

At first, it seemed as though Kyle might have been about to have his running buddy dreams crushed. “The first time I tried to take him running with me, I drove him out to some crushed gravel trails not far from our house. We were about 100m in when he put the brakes on. I thought maybe I’d gotten a dog that wasn’t into running with me,” Desmormeaux says. 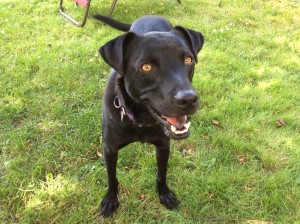 “But then the winter came and with the weather in Ottawa, walks were short due to the cold. So I decided we were going to try running again and this time he loved it! Well, he might have just been motivated to get the job done quickly due to the -35C whether, but regardless, he finished the 3K loop with me,” Kyle explains.

Since then, Chopper and Kyle have gotten into the routine of running together three or four times per week. Chopper usually gets to go for around 5K and sometimes Kyle will swing by to pick up to join him on his cool down after workouts.

Chops! Asking me to run some miles with him. Of course! Let’s get after it pic.twitter.com/ZQrkyMX1Qr

Kyle, who is planning to compete at the Army Half-Marathon and Queen’s Invitational in Kingston this month (yes, some university races are open for non-students!) can rely Chopper to help him hone his finishing kick. “We usually run about 4:45 Ks, but then when we start to get close to home, he’ll drop the pace to 3:25s!” Kyle laughs, “the whole point is to tire him out, but his finishing sprint gets him all riled up and when we get home, it sometimes seems like he has more energy than when we started!”

Other than the finishing kicks, Chopper actually serves as a reminder to keep the pace easy, “Usually when we run together he just runs behind me at a relaxed pace,” Kyle says, “since I’m all about going fast on my runs, it’s a nice change of pace taking him out. He reminds me I need to slow down and smell the flowers once in a while.”

If you or someone you know runs with their dog, we want to hear your story! Send an email to caela@runningmagazine.ca.