Laura Townsend was always a very active child. Growing up on a dairy farm in Quebec, her chores kept her busy, and she loved sports — except for running. Today, she’s both an ultrarunner and an ultra-mom: she’s the mother of five kids aged seven to 15, she’s on Day 453 of a run streak and she’s planning on running 50 ultras by her 50th birthday. The 46-year-old is also a survivor of sexual assault and is the race director for the Survivorfest, which features six-, 12- and 24-hour runs to raise money for the area’s sexual assault support clinic, the Saffron Centre in Sherwood Park, Alberta. 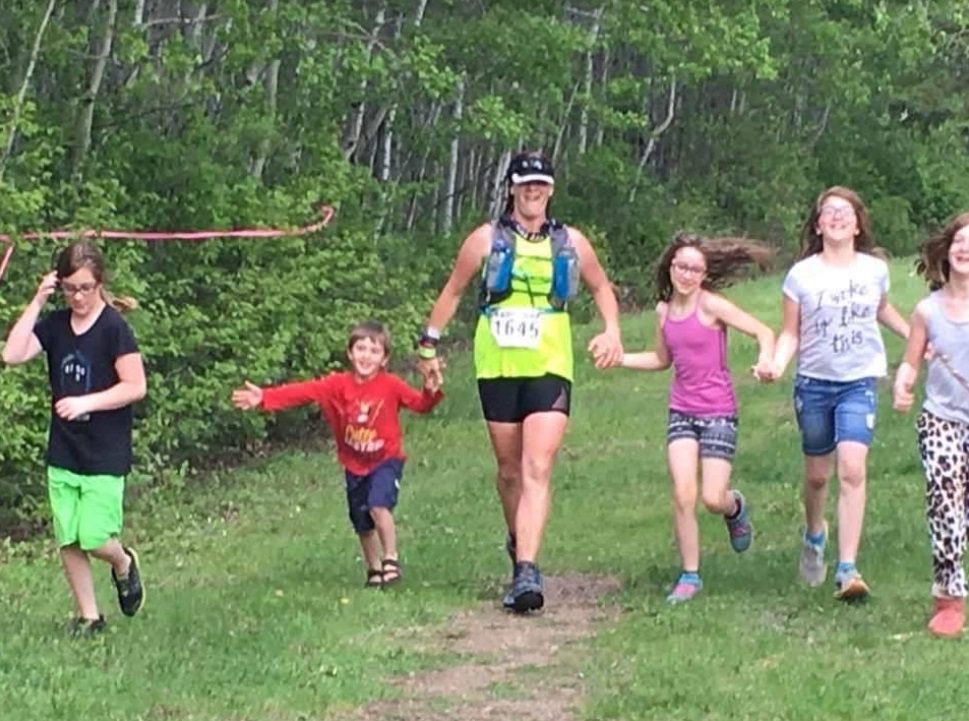 Townsend began running in her 20s as a way to relieve stress, and despite doing it regularly she still didn’t really like it. When she and her husband found out that they were pregnant with triplets, they decided they would both choose one activity they could do outside of family and work, and for reasons unknown even to her, Townsend decided she would keep her running habit. Eventually, she fell in love with the sport, and in 2014 she ran her first ultramarathon, the Frozen Ass Fifty in Calgary.

“I got it done and I just loved it,” she says. “I loved the community, and I was just hooked.”

By that time, Townsend had four kids under the age of five, and her busy schedule as a mom only allowed her to run two to three days per week. Her friends at her local running group continued to support and encourage her, and her running time became her social time as well. As her kids have gotten older, she has been able to train much more consistently, and she has now set her own goal of running 50 marathons before she turns 50.

To date, Townsend has completed 34 ultramarathons. The COVID-19 pandemic and subsequent race cancellations sidelined many of her goals for the year, but she has adapted. In an effort to help other race directors, Townsend participated in several virtual races in the summer of 2020, and her 35th ultra is coming up in February when she will be running the virtual version of the Frozen Ass Fifty, which she has run nearly every year since she first ran the race.

With all of the participation medals she has collected over the years, Townsend’s biggest running accomplishment has arguably been acting as the race director for the Survivorfest, a six-, 12-, or 24-hour race run around a track in Sherwood Park, Alberta, where Townsend lives. The inaugural race was held in 2019, which saw 34 participants complete the event in support of the Saffron Centre. As a sexual assault survivor herself, the charity aspect of the event is close to Townsend’s heart.

“I really want to spread the message that other survivors are not alone and we can go beyond being a victim,” she says. “It still blows me away when other survivors come up to me and let me know that it happened to them. A lot of them never share it.”

Townsend learned about the Saffron Centre when they were running an education program at her children’s school, teaching kids about consent (in age-appropriate ways), social media, relationships and friends.

“This might not have happened to me if this had happened in my school,” she said. “It’s just that little bit of information that can just be a life-changer for these kids.”

The first Survivorfest in 2019 was a huge success. Not only did the event raise over $3,000 for the Saffron Centre, but two of the participants managed to qualify for the Canadian 24-hour World Championships team. Sadly, the 2020 event had to be cancelled due to COVID-19, but Townsend did her own Survivorfest in May (which is sexual violence awareness month), running 134K around a 400m track in 24 hours.

Currently, Townsend is planning on hosting the in-person event on June 12-13 this year, provided pandemic restrictions allow it. There is also a virtual option, which opens up the race to runners across the country to participate in the event.

At 46 years old, Townsend has four years to complete her goal of 50 ultras, which will require her to complete four races per year — an easy feat for the supermom. Of course, once she’s done that she has no plans on stopping, and she has decided she will return to her childhood home to run the Bromont Ultra in Quebec as her 51st ultramarathon.

“I haven’t told many people that,” she laughs. “That’s a Canadian Running exclusive.”

You heard it here first, folks.

RELATED: Training for the mental side of ultramarathons