Janetos was beginning CFL (Canadian Football League) tryouts when he decided to pivot to another career path. That’s when Janetos decided to become a chef. Once Janetos made his decision, it became his entire life. Janetos trained in top kitchens in Europe with the sole focus of mastering his craft.

There was a time when the chef became caught up in pursuing his career and lost sight of his health. “I was in London, England and I had lost over 30 pounds. The doctors told me that my stress levels were critical, I’d lost too much weight, I wasn’t eating properly, and I was only sleeping three to four hours a night. They were concerned.”

Janetos jokes that his answer to the doctors was something along the lines of, “I’m trying to become the best chef in the world, do you know what that’s like? Give me some drugs, I have to go to work in three hours.”

When @guinnessworldrecords thinks you fast but behind the scenes she is always pushing the pace… To my No.1, thanks for being there with me for the training days during the race season and for all the countless times I doubted myself and the down days you brought me back up. Thanks for your unconditional support. I love you @katerb . . . . #STWM2017 #cutlerandgross

He continues, “I got so consumed and eventually realized that people kill themselves doing this job. Running gave me balance.” Janetos came to running through a Nike group called ‘The Foodrunners,’ which is a run crew geared towards chefs and members of the hospitality industry. “Running gave me some time to relax. It allowed me to not be so aggressively focused on this one goal.”

Janetos is used to being part of a team, so he really enjoys that aspect of The Foodrunners. As his running improved, he was asked if he’d like to try and run a world record. He jokes that his first thought was, “not really.” 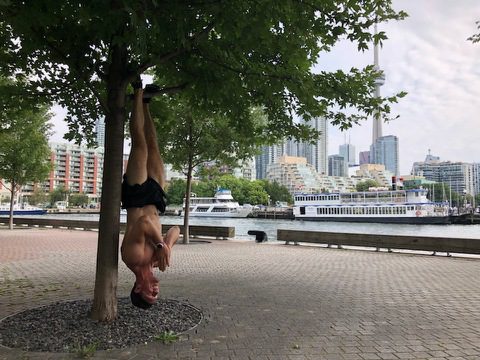 RELATED: A Milan chef and artist is creating “shoeshi”, mini sneaker sculptures of salmon and rice

Janetos is looking to break his own half-marathon record at the 2018 Scotiabank Toronto Waterfront Marathon this October. “I did not train properly last year. But this year I’ve been training six days a week consistently, and I’m very confident. This is the first consistent season training-wise I’ve ever had and it feels really good.”

Last year Janetos ran in regular chef’s whites, but this year one of his sponsors, Lululemon, is putting together a custom suit. He jokes that chef’s whites aren’t all that comfortable to run a half-marathon in. Janteos is also sponsored by Cedarlane Culinary, New Balance, contactsexpress.ca and one of his restaurants, Liquor Donuts.

Janetos is a partner at the BELI Hospitality Group in Toronto. For more information on the Scotiabank Toronto Waterfront Marathon, or to register, click here.