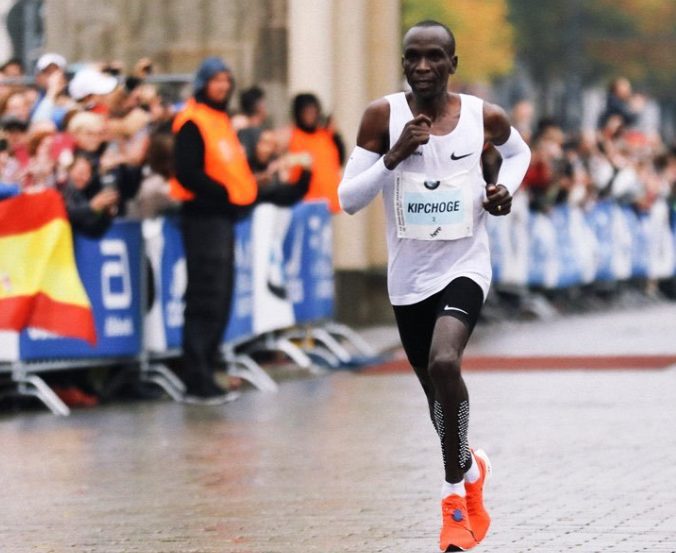 Eliud Kipchoge set a world record on Sunday, and since his history-making run, runners and fans are looking into every aspect of his race. From his shoes, to his pacers, to his splits, his entire race has been deconstructed by the masses to try and comprehend what it takes to be that fast.

Kipchoge’s race nutrition plan for Berlin centered around Maurten. The company created a hydrogel which contains high levels of easily digestible carbohydrates. Kipchoge used the GEL 100 as part of his nutrition plan during his record breaking run.

The company describes the product as, “built by harnessing natural hydrogel technology and built with six natural ingredients. It doesn’t contain any colorants or preservatives and comes in 40g servings that contains 60 per cent carbohydrates–a high weight-to-energy ratio.” 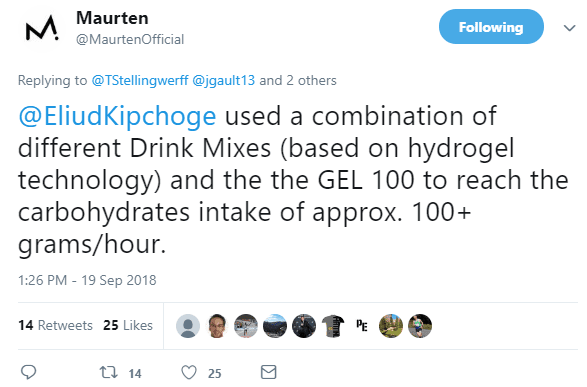 RELATED: Rachel Cliff debuts the marathon only 53 seconds off the Canadian record

Kipchoge took in over 100 grams of carbohydrates per hour during his race. Maurten tweeted to Canadian physiologist Trent Stellingwerff that Kipchoge’s nutrition was a combination of drink mixes, based on hydrogel technology, and the GEL 100, to reach his nutrition needs.

For context, 100 grams of carbohydrates in solid food is roughly: four baked medium sweet potatoes, or 3.5 cups of cooked oatmeal, or four slices of whole wheat bread, or even two Starbucks blueberry muffins. Obviously the listed foods aren’t ideal for race performance for many reasons, but it paints a picture of just how high-intake 100 grams of carbohydrate is.

Stellingwerff commented via email that, “100 grams of carbohydrate per hour is on the upper end of what I have seen most runners be able to tolerate – but plausible for sure.” He continues, “You tend to see these types of rates more often in cycling, as there is less GI movement when compared to running.”

Stellingwerff stresses that, “The greater the carbohydrate oxidation during exercise (e.g. marathon running), the more efficient the energy production. The best way to maximize carbohydrate oxidation is to show up well fueled at the start line, as well as continue carbohydrate intake during the event – which is exactly what Kipchoge appeared to do.  At his level, when compared to fueling with water alone, most might estimate a one to three percent improvement in performance with his fueling program.”

RELATED: Fueling for the half-marathon: do I need gels for 21.1K?

Kipchoge ran a phenomenal race, and his nutrition plan played a part in his success. Having a nutrition plan is key for longer races. Consider trying longer runs with the gels and drinks you plan to consume during your race prior to the big day.